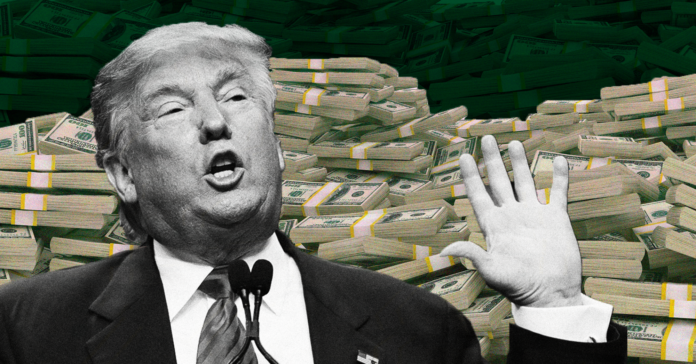 Ongoing revelations regarding President Donald Trump’s taxes have raised serious legal and national security questions about the commander-in-chief’s financial wheelings and dealings. But some Texas pastors say the inquiries shouldn’t stop there. The way they see it, there’s a moral — even spiritual — component to the seemingly secular ritual of handing over a portion of one’s earnings to Uncle Sam, and they have the Bible verses to prove it.

“Jesus’s very famous teaching on this was ‘render unto Caesar what is Caesar’s, and render unto God what is God’s,’” said Rev. Eric Folkerth, a Dallas-based pastor for the United Methodist Church. The passage Folkerth is referring to comes from the New Testament story in which questioners seek to embroil Jesus in controversy by asking him whether the Jewish people ought to pay taxes to their Roman occupiers. But Jesus turns the question around, asking his interrogators whose image appears on the Roman coin. The answer — Caesar — serves as the basis for Jesus’ oft-quoted response, which Folkerth and millions of other Christians have taken as the greenlight for paying into a state system.

Among those other Christians is the lead pastor of Austin’s Hope Community Church, Rev. Aaron Reyes. “The biblical principle is that we should pay our taxes, whatever those taxes may be and even if we disagree with those taxes,” he said. The way Reyes sees it, the Old and New Testaments are rife with examples of God endorsing government as a critical (albeit flawed) institution for preserving justice. As citizens, “we should be willing to pay our share of what’s being asked of us” into that system.

Arguments like this one take for granted the view that a person is more than an individual, but a member of a community in which all are responsible for the welfare of the other — a view Folkerth sees iterated throughout the Bible.

“At a certain point, you have to ask yourself, are you willing to be a part of society?” And not just any society, but the one reflected in Jesus’s admonishment to care for the poor, the orphan, and the otherwise marginalized. This is the question the Bible and TurboTax share. It’s also one Folkerth believes Trump, with his $70,000 deductions for hair styling, has answered with a resounding “No.”

“He’s just gone well beyond what could in any way be seen as just or fair in terms of avoiding taxes,” he said. “I think that’s fundamentally wrong.

Equally descriptive of Trump’s character and what he values is the hundreds of millions of dollars of debt fastened to the president’s ankles, believes Rev. Marcus Womack, a UMC pastor based in Irving.

“To be ordained to the United Methodist Church, you are asked a specific question and the answer has to be ‘No,’” he explained. “It is: ‘Are you in debt so as to embarrass yourself in your work?’”

There are practical reasons behind the question, starting with the modest pay that comes with the cloth. But there are theological underpinnings, too.

“It is about what we have given control over ourselves over to.” Beyond that, he says, “I see [Trump’s] debt as telling us a story about where his values and priorities are.” And that story is one of a man very much concerned with both acquiring and projecting wealth.

At the end of the day, Womack believes the story is as much an invitation to peer inward as it is into the president’s financial follies.