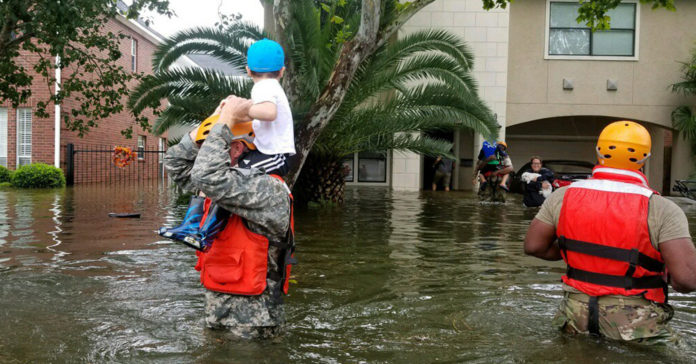 Spurred by rising tides and temperatures, Texas’ religious leaders are leveraging the power of faith and community to reshape the way Texans engage with the environment. Their efforts are designed to inspire new ranks of environmentalists driven less by fear and doomsday predictions than a shared belief in stewardship as an act of worship.

From El Paso to Tyler, Texans have to cope with the rapidly shifting climate. Crop-killing drought torments farmers in the west even as residents along the Gulf Coast brace again and again for flooding brought by storms that seem to grow in size and numbers with each passing year. Meanwhile, people in Dallas-Fort Worth are left to fend off severe property damage brought on by hail storms featuring ever-larger hailstones. Wildfires, flooding and dangerous heat waves are increasing in Texas, and research indicates that the problems will get worse.

Even on the precipice of such suffering, vital education on the subject remains hard to come by, with Lone Star politicians opting instead to tiptoe around the issue. This year, Texas was one of just six states to receive an “F” grade for its school curriculum on climate change from the Texas Freedom Network Education Fund and the National Center for Science Education.

Faced with Austin’s failings, leaders of diverse religious backgrounds are teaming up to offer hope and practical daily tips to an increasing number of Texans, and in so doing infuse spiritual weight to the call to climate activism.

Lisa Brenskelle is the team lead for the Gulf Coast-based chapter of Lutherans Restoring Creation and the founder of the Interfaith Environmental Network of Houston. The way she sees it, her faith doesn’t only support but demands her work on behalf of Mother Nature.

“God has ordained humanity as caretakers on his behalf,” she said. “We are here to act as stewards.” And while she notes that hers is a “specifically Christian” view, she has yet to encounter a faith without this same theme woven somewhere in its belief system.

This sense of religious obligation has been a major motivator for David Leslie, who, since taking on the mantle of executive director of Houston’s Rothko Chapel in 2015, has made climate education and action a central tenet of the center’s programming.

“For many, many religious communities, it’s been an opportunity to revisit the creation narrative through new eyes,” he said, underscoring that in the Hebrew Bible God declares creation “good.” Incumbent, then, as believers is restoring “that sense of goodness.”

Another binding theme across religions he sees is that of concern for posterity. “I think the sense of legacy for future generations is huge in many faith communities.”

As for the work itself, Brenskelle and Leslie both mentioned a focus on education, be it through large symposia, national campaigns or weekly discussion groups.

“I know people who have personally made lifestyle changes as a result of programming that I have organized, concrete actions to reduce their carbon footprint,” Brenskelle said. “Period. That’s a fact.”

For Sister Ricca Dimalibot of Houston’s Sisters of Charity of the Incarnate Word, this education comes in the practice of the principle, including the vow of poverty she and her fellow sisters took as part of their becoming nuns in the Catholic church.

“Everything that we use, we reuse, and we don’t buy things we don’t need,” she said. This and other commitments to sustainability — including recycling and composting — are all on display for the thousands of people who come to the sisters’ facilities each year, be it to pray or retreat for a time from the world.

A second area of focus for these “creation care” activists is advocacy.

“It’s very clear that to address climate change requires action on the part of government,” Brenskelle said, emphasizing this extends from city hall to the White House. Each spring, her faith, the Evangelical Lutheran Church of America, descends on Washington to bend lawmakers’ ears in the direction of a particular issue. Last year, that issue was climate change.

Katherine Hayhoe is an evangelical Christian and climate scientist based at Texas Tech University.

“I’m a climate scientist because I’m a Christian,” she told the Juneau Empire newspaper. Her argument: a person cannot claim to be pro-life and ignore the issue of climate change. It’s an argument she shares with anyone willing to listen, be it influential lawmakers or parishioners in rural Alaska. Fortunately for both nature and her listeners, that number is growing thanks to an unwillingness among younger generations to politicize the issue. It is this fact that a number of religious leaders engaged in this work say gives them hope.

That, and their faith. And here is perhaps the secret weapon these stewards have to offer to the fight against climate change.

“I can tell you despair is demotivating,” Brenskelle said. “If you feel in despair, you are not going to do anything because you think it’s hopeless. The fact that religious faith can give people hope is incredibly motivating. Without it, I would be demoralized.”