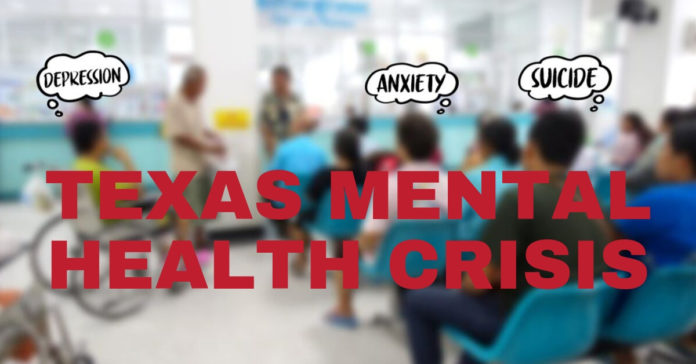 North Texas is in the throes of a “behavioral health crisis,” according to local health care professionals. Since December 2017, the closure of several behavioral health facilities has resulted in the loss of more than 280 psychiatric care beds throughout the Dallas-Fort Worth area.

Demand for in-patient psychiatric services is only increasing across the Metroplex — resulting in patients being sent to the emergency room and correctional facilities.

A 2017 study by the Bureau of Justice Statistics found that 37 percent of state and federal prisoners “had been told by a mental health professional in the past that they had a mental health disorder.”

Because Dallas-Fort Worth is the largest city in Texas without a state-run psychiatric hospital, the area is struggling to keep up with the demand for inpatient treatment.

“There are 10 times more individuals with serious mental illness in jails and prisons than there are in state psychiatric hospitals,” Dr. E. Fuller Torrey, founder of the Treatment Advocacy Center, told the Dallas Morning News in February.

Lack of mental health care is a statewide problem

Unfortunately, the problem isn’t a recent development. A 2018 report from the North Texas Community Health Collaborative found that six Dallas-area counties had no psychiatric care capacity, and another, Parker County, had just 12 beds for a population of 133,000.

One of the things that makes tackling Texas’ problems with mental health care so difficult is the lack of information about available bed space. Currently, there’s no state agency to track the number of free and occupied psychiatric beds.

Rep. Shawn Thierry (D-Houston) attempted to address the information gap in the last legislative session with House Bill 628, which would have created a statewide registry of available acute psychiatric bed space.

Despite garnering the support of mental health interest groups, like the National Alliance on Mental Illness, Thierry’s bill never made it to the House floor.

Thierry wasn’t the only legislator trying to tackle Texas’ mental health crisis, but unfortunately, concern for the mentally ill wasn’t shared by a majority of the state’s lawmakers.

Of the 24 mental health-related bills introduced in the 2019 legislative session, only one passed. The sole mental health bill to pass the legislature was HB-18, which requires certain public school employees — like nurses and counselors — to receive trauma and grief care training.

The lack of movement on mental health legislation was a little surprising, considering that Gov. Greg Abbott named mental health issues as one of his emergency items going into the session.

Abbott mentioned mental health seven times in his 2019 State of the State address and said that “mental health issues are not just confined to our schools. They touch our entire society.”

Proposals to fix the problem

Although Nelson’s bill authorizing the consortium passed in the state Senate, it died in the House when a point of order sent it from the house floor back to the Committee on Public Health.

The need for the Texas Mental Health Care Consortium becomes readily apparent when the state’s per capita numbers are taken into account. In 2015, the most recent numbers available, Texas had one psychiatrist per 13,794 adults, according to the state’s Department of State Health Services (cached to prevent downloads).

The numbers aren’t any better when it comes to child psychiatrist access. The DSHS found that there is one psychiatrist per 12,122 children. There are only 357 psychiatry residencies in Texas, and only 53 of those positions are for child/adolescent psychiatrists, again from the North Texas Community Health Collaborative.

The widespread nature of the shortage areas means that about 41.6 percent of Texas’ estimated 29 million people can’t receive mental health care. The Kaiser Family Foundation estimates that only 34.5 percent of Texas’ mental health needs are being met and that it would take an additional 585 psychiatrists to address the provider shortage.

The lack of access to mental health care in Texas is so pronounced that the nonprofit organization Mental Health in America ranked Texas dead last in overall access to care — 51 out of all 50 states and the District of Columbia.

It’s worth noting that when the data is parsed a little finer, Texas does a little better. MHA ranked the Lone Star State number 30 for adult access to mental health care and number 28 in youth access to care.

However, MHA’s ranking system isn’t entirely foolproof. The organization considers New Jersey the state with the highest prevalence of mental illness, followed by Mississippi and Texas.

Despite the setbacks and shortcomings, Texas is making attempts to address its mental health problems.

The state’s Health and Human Services Commission, the sister agency to DSHS, is spending $745 million for additions and renovations for hospitals in Austin, Kerrville, Rusk, and San Antonio.

When the new hospital opens in 2022 it, along with the newly revamped UTHealth Harris County Psychiatric Center, will create the UTHealth Continuum of Care Campus for Behavioral Health — the largest academic psychiatric hospital in the U.S.

As nice as a $745 million investment is, it’s just a drop in the bucket when it comes to Texas’ needs.