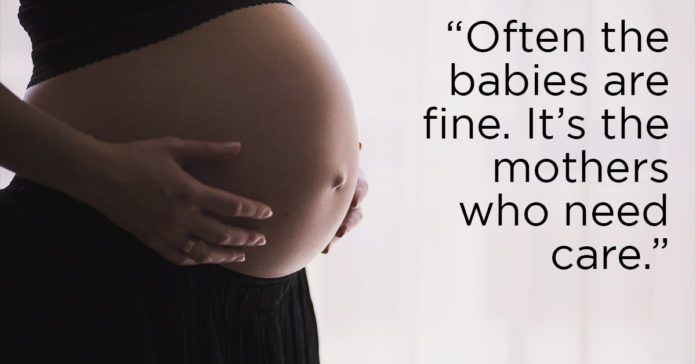 Chelsea Aldrich was waiting for her husband to get home with extra-spicy Thai takeout when she realized her contractions weren’t stopping. Since they’d only started an hour or so ago, she thought the first contractions meant she was still days away from delivering their son.

By the time she arrived at the birthing center, two hours later, she was six centimeters dilated. Soon after, baby Owen would need to be turned by a team of midwives while Aldrich endured intense discomfort.

“[There were] four strong, powerful women telling me to push as hard as I could for just over an hour, and he was born,” she said, as a now 10-month-old Owen cooed with contentment. “The level of care I got, I felt was really thorough.”

Aldrich’s story illustrates how education, preparation, and a support system intersect, creating a healthy environment for newborn delivery and maternal care. However, many Texas women are not as fortunate as Aldrich.

In 2015, the organization that would become the Maternal Mortality Review Committee (MMRC) and the Texas Department of State Health Services (DSHS) were tasked with bringing down Texas’ maternal mortality rate.

To tackle the problem, the agencies went back and studied the history of Texas’ worst year for maternal mortality, 2012. In that year, about 90 women died in childbirth or within 360 days of giving birth.

The agencies spent three years reviewing the cases and issued a joint report in 2018. In the report, the agencies found that “nearly 40 percent of maternal death cases reviewed were identified as pregnancy-related.”

Maternal mortality is a structural issue

One critical data point from the report showed that black women in Texas experience 2.3 times the pregnancy-related mortality rate as non-Hispanic white women — regardless of socioeconomic status, education level, or insurance coverage.

Darcy Hamre, the outreach coordinator for Austin-based maternal health group Circle UP: United Methodist Women for Moms, saw an undeniable problem as she looked at the data.

“We knew we had to address structural racism to address inequities in maternal health,” Hamre said. Circle UP partnered with the Black Mamas Community Collective to host “brunch and learn” sessions on the topic of racial bias.

Community groups weren’t the only organizations that recognized the intersectional nature of maternal mortality.

The DSHS/MMRC report acknowledged that “a complex interaction of personal, provider, facility, systems, and community factors” contribute to the problem.

Of the 180 factors that can cause a pregnancy-related death, 42 percent are individual and family factors and 36 percent provider factors. Another 16 percent of the facility factors and 6 percent were system and community factors.

When the researchers combed through the case histories, they found that the vast majority of deaths — nearly 80 percent — were considered “preventable.” The researchers also found that most maternal deaths in Texas occur more than 42 days postpartum.

More than half of those deaths, 56 percent, occurred more than 60 days postpartum when coverage for new mothers on Medicaid runs out.

In Texas, Medicaid coverage levels for parents are much lower than those for pregnant women. A family of three can’t make more than $3,636 per year and qualify for Medicaid in Texas.

A lack of education can prove fatal

Gabriela Gerhart —founder of Motherhood Center in Houston, and a doula — said that often women are not prepared for what comes after the birth.

“We [expect] to see them back soon for a mother and baby class, but the journey takes a different path,” said Gerhart. “Often the babies are fine. It’s the mothers who need care.”

According to Gerhart, the answer to improving maternal mortality rates is education.

“Some of our clients [at Motherhood Center] are going into pregnancy, childbirth, and postpartum unprepared,” she said. Gerhart likens the lack of education to a loss of a metaphorical village.

“We don’t live in that village atmosphere any longer, hearing information passed from generation to generation,” she said. “Education needs to increase, and we must create a better support system for women to access information. We must try and recreate the village.”

A lack of postpartum education proved to be dangerous for Kayla Stoddard. When the mother of four had her youngest child, the birth was complicated by an unplanned C-section.

The operation left Stoddard with severely impaired mobility, as she could only lift a few pounds.

“I wasn’t prepared for the recovery,” Stoddard said. Stoddard’s husband only received three days off from work after the birth, which meant Stoddard wound up caring for the couple’s youngest child without a support system.

“[I had] to heal through all that, and it was almost horrifying,” she said. “[I couldn’t] even stand up straight because it sent pain down [my] back.”

Had she been better educated about the risks of C-section, postpartum recovery, and mental health care, Stoddard says things would have been less scary. She also may have been able to prevent the staph infection that developed from her C-section incision.

The ‘four horsemen’ of maternal mortality

Although incision site infections are common and often preventable, infections/sepsis is one of the leading causes of maternal mortality. A recent article in the Journal of the American Medical Association found that nearly 25 percent of maternal deaths in the U.S. are sepsis-related.

The MMRC/DSHS report also noted the link between infections/sepsis and maternal mortality. The report’s authors noted that the most common causes of pregnancy-related deaths were cardiovascular and coronary conditions, obstetric hemorrhage, infection/sepsis, and cardiomyopathy.

Together these four horsemen of maternal mortality accounted for 76 percent of all pregnancy-related deaths in Texas, according to the report.

After the report was delivered, DSHS requested an additional $7 million in funding. The money was used to start the Texas Alliance for Innovation on Maternal Health (AIM) initiative.

Based on a nationwide model, AIM provides ‘maternal safety bundles’ to hospitals and clinics throughout the state. The AIM bundles, as they are known, are information packets.

By standardizing some of the best practices for healthcare professionals and expectant mothers, the bundles help address problems like obstetrical bleeding.

“Ninety-seven percent of [Texas] hospitals with Labor and Delivery units are participating — that’s way beyond our target,” Chris Van Deusen, a DSHS spokesperson, said. “We’ve been overwhelmed by the positive response by hospitals.”

One of the upcoming bundles will address severe hypertension in pregnancy. Another bundle will focus on obstetric care for women with opioid use disorder — Texas will carry out the pilot program for that bundle.

Addressing maternal health and mortality at the societal level will take time and require incremental steps from Texas governmental agencies and community organizations.

The first step has already been taken: acknowledging the issues around healthcare access, education, and racial disparity.

By starting a conversation about systemic problems in healthcare advocates, experts, and mothers have brought awareness to risks facing Texas women.

Whether they choose doctors or midwives, hospitals or home births, women continue to face challenges and complications before, during, and after birth. Most of these issues are preventable with early intervention and a dedicated support system.