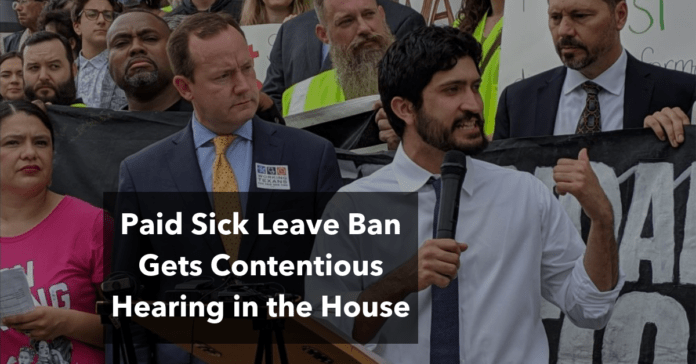 Reform Austin previously reported prior to session the coalition in the Legislature formed to ban and preempt Austin and San Antonio’s sick leave ordinances. With the Governor and Lt. Governor marking this issue as a priority for the session, it seemed all but decided for a bill to ban sick leave ordinances to pass the Legislature. However, Senator Creighton changed the language of the bill before the Senate committee hearing to remove a provision that explicitly protected NDOs.
However, the backlash from the business community to this change and claims of “bathroom bill 2.0” led Creighton to break his original bill into smaller bills which separately prevented employee benefit ordinances, fair scheduling ordinances, sick leave ordinances, and ban the box ordinances, which requires employers to remove the question about criminal records in the early stages of hiring.

Chair Dade Phelan (R-Beaumont) introduced three of Creighton’s bills, including the sick leave preemption bill, SB 2487, saying “it gives employers flexibility” and “predictability” on sick leave policies and keeps its regulation at the state level. Those who testified in favor of these bills criticized the current “patchwork” of regulations.
Council member Greg Casar and others who testified against the bill asked the Legislature to pass a statewide sick leave law if their issue was with cities making those decisions. Currently, two sick leave bills are pending in the House State Affairs committee and a Senate bill, which has not even received a hearing.
Unions, progressive organizations and some small businesses that participated in the process of the sick leave ordinances in Austin argued against the bill saying this is an issue of local control and public health.
Phelan and other committee members were insistent for the support of the bill because they argued “if you increase the cost of business [through mandating paid sick leave], they pass it on to the consumer.”
Throughout the testimony, it appeared clear that the Texas business community generally supports the bills because they preempt local government regulation of employee benefits which they find burdensome; however, a majority will oppose these bills so long as NDOs are not explicitly protected.
Rep. Richard Raymond (D-Laredo) asked every person testifying for the bill if they supported the NDO protection being added back in the bill. Most of them did or gave no comment.
In the end, the committee amended one of Creighton’s bills, SB 2486, to include this explicit protection and passed it 10-2 sending it to the House floor. Two of the three Democrats on the committee, Rep. Eddie Rodriguez (D-Austin) and Vice Chair Anna Hernandez (D-Houston), were the nay votes. It remains to be seen if the Senate, where the language for these protections were first removed, will be amenable to it being added back in during the conference committee process should any of these bills pass the House. SB 2486 affects fair scheduling ordinances.