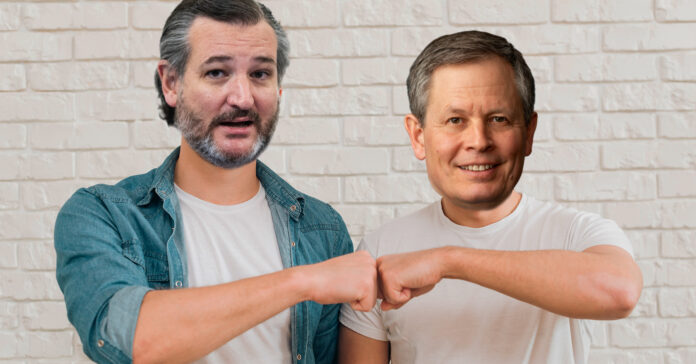 Texas Sen. Ted Cruz received backlash after fist-bumping Montana Sen. Steve Daines for voting “no” on a bill that would help veterans sickened by toxic fumes from burn pits in Iraq and Afghanistan.

The video clip of that moment sent Democrats and advocates on a fury rampage.

Comedian and activist Jon Stewart slammed Cruz during an appearance on MSNBC, “The most despicable part of this whole thing is watching on the Senate floor Ted Cruz fist-bumping and then patting each other on the back when they blocked this bill.”

In response, Cruz’s office provided a written statement that he is a “strong supporter” of the legislation and the nation’s veterans, the dispute is over a provision in the bill that allows Democrats to spend another $400 billion on programs not related to veterans. Cruz said that Democrats were “playing a budgetary trick,” and that he and his Republican colleagues would work on advancing a bill while removing the provision.

However, according to The Washington Post, Cruz, along with Sen. John Cornyn and many other republicans, previously voted for the bill when it was approved 84-14 but then reversed course and blocked it this week.

Stewart pointed out that the only difference between then and now, was a minor technical correction in the bill, and blasted the Texas Senator on Twitter:
“Now, I’m not a big city Harvard-educated lawyer, but I can read. It’s always been mandatory spending.”

“Everything in the government is either mandatory or discretionary spending depending on which bucket they feel like putting it in. The whole place is basically a fucking shell game,” Stewart said.  “And, he’s pretending that this is some new thing that the Democrats pulled out, stuck into the bill, and snuck it past one Ted Cruz.”

For years, activists had been fighting for an expansion in veterans’ health care coverage — resulting in a bill known as the Pact Act.

The PACT Act would have removed the burden of proof veterans currently need to show in order to receive assistance, after being victims of exposure to toxic substances and fumes during their service.

The legislation was poised to pass after sailing through the Senate by an 84-to-14 vote in June. But when the bill was sent back to the Senate for a second vote,  25 Republicans reversed course. The bill fell short of the required 60 votes to overcome a filibuster, with a final 55-42 tally.

The situation was called “corruption at its finest,” by Stewart.

“Sadly, these are the people that fought and defended their right to this fuckery,” Stewart told reporters on Capitol Hill. “If this is America First, America is fucked.”

Veterans, military family members, and advocates were staged on the Capitol steps for several days, pledging to remain until Congress passed the veteran healthcare bill.

“We fought for this country freely, and we expect now that people will fight for us and fight for our basic health care,” said Samantha Turner, an Army veteran who served near burn pits in Kuwait. Turner, who has sleep apnea, now uses a machine to breathe at night.

“We’re not political pawns,” she added.