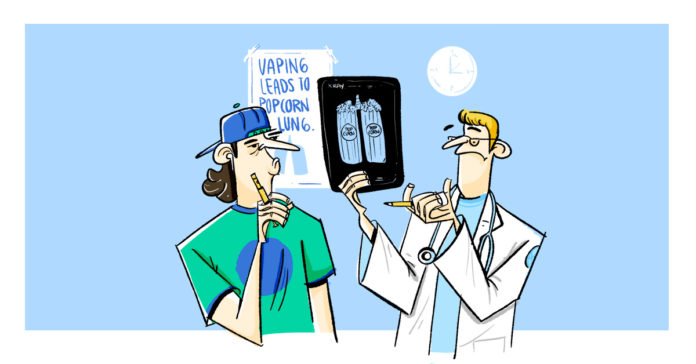 They’re furious over the lack of federal oversight on the manufacturing of vaping devices. And they’re ticked off by the explosion of vaping injuries and deaths.

“It’s just out of control,” said Republican Sen. Charles Perry of Lubbock, vice chairman of the committee, according to the Dallas Morning News.

Perry made his comment at a meeting of the Texas Senate Committee on Health and Human Services on Tuesday, Dec. 3.

The hearing comes amidst an ongoing national health crisis related to the use of e-cigarettes and other nicotine delivery devices.

One of the main health concerns related to e-cigarette use is bronchiolitis obliterans, or popcorn lung as it is known.

Popcorn lung is related to inhaling diacetyl, a buttery-flavored chemical in foods like popcorn, caramel, and dairy products. Inhaling diacetyl results in a scarring of the tiny air sacs in the lungs, which causes thickening and narrowing of the airways.

Popcorn lung leads to coughing, wheezing, and shortness of breath.

Over the last 12 months, there have been 2,290 lung injury cases and 47 deaths associated with vaping, according to the CDC.

About 210 of those injuries have occurred in Texas, according to the Department of State Health Services. So far only one person has died in Texas in relation to vaping.

Vaping related illnesses have been especially prevalent in North Texas, where more than 100 lung injuries have been reported.

The high percentage of vaping related illness and injury in North Texas’ juveniles tracks with what is being seen across the U.S.

Underage vaping is extremely common in Texas. About 19 percent of the state’s high school students regularly use e-cigarettes, according to the anti-tobacco advocacy group Campaign for Tobacco-Free Kids.

The high rate of e-cigarette usage among teens is the result of a “patently youth-oriented” advertising campaign, according to a recent paper from a group of Stanford researchers.

One of the ways Texas has tried to crack down on underage vaping was raising the smoking age from 18 to 21 years-old. Members of the U.S. military are exempt from the new law.

The Senate committee heard testimony on the effectiveness of the new law on Tuesday. Oddly, enforcing the new measure has become the burden of the Texas Comptroller’s Office.

Joshua Thigpen of the comptroller’s account maintenance division testified about the day-to-day reality of enforcement.

State-issued permits for tobacco sales have been a key asset for investigating potential underage tobacco sales, Thigpen said. However, the new law has proven inadequate to address underage vaping in Texas.

“Taxpayers who sell e-cigarettes do not have any permitting requirements other than a sales tax permit,” Thigpen said, according to the Austin-American Statesman.

He added that the lack of state permitting requirements means that authorities are “unable to identify retailers who only sell e-cigarette products.”

Committee members offered a litany of suggestions — from a separate permit for e-cigarette and vaping retailers to an outright ban on all vaping devices.

Vape shop owners and consumers spoke out against the proposals. They argued that further regulations could hurt businesses and prevent people from using e-cigarettes to quit smoking.

However, 25 Texas cities have regulated e-cigarette use in some form or another.

Despite the protestations of the vaping industry, the committee is having to weigh concerns about the long term effects of inhaling various chemicals against the needs of small business owners.

While the lasting repercussions of vaping remain unknown, it has been linked to seizures, difficulty breathing, and possible cardiovascular toxicity.

All of vaping’s side effects are particularly dangerous for adolescents, and, with 32.7 percent of Texas’ population under the age of 18, they could prove disastrous for the Lone Star State.