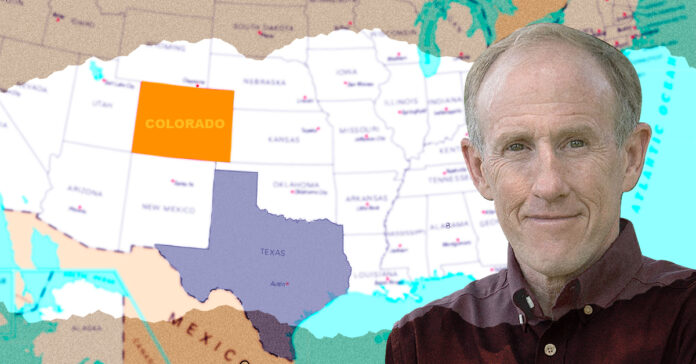 The Denver Post newspaper says Crested Butte is the state’s best ski town for annual snowfall. This is where Texas state Rep. Gary Gates, a Republican from Fort Bend County, says he lives half of every year.

How Gates makes money here, and his mindset about using government subsidies to do so, is starkly different from his business outlook in the Houston area, where public records show his companies own more than a quarter billion dollars worth of apartment complexes.

It’s like the difference between snow-skiing down a mountain and water-skiing on Clear Lake.

The half-Texas Gary Gates has been publicly labeled a slumlord by Wayne Christian, the Republican who chairs the Texas Rail Commission, and Robert Gallegos, a Houston city council member. Gates’ latest landlording controversy involves his $7.4 million purchase, from a non-profit organization, of Pleasant Village Apartments. It’s a collection of rental units for seniors in Pleasantville, an east Houston subdivision originally marketed to Black homebuyers. He already has moved to evict residents of two units, saying that court action to bounce them out would qualify them for government rental assistance.

Gates acknowledged that he plans to jack up the rent on the units starting next year — with the promise of making $1 million in improvements — and no longer reserve all of the units for older people. Frightened residents conducted a public demonstration against Gates’ plan and drew the participation of U.S. Rep. Sheila Jackson Lee, D-Houston, who said she would ask the federal government to block Gates’ move.

Now contrast half-Texas Gates’ reputation as a renter to half-Colorado Gates’ journey as an apartment builder.

In what the Crested Butte News called “the largest private-public affordable housing project in Gunnison County,” Gates built and operates the 77-unit Paintbrush apartment complex, where about half of the dwellings were set aside to rent for monthly prices that blue-collar workers can afford.

The goal of the project, which Gates spent years discussing with local government officials, is to provide housing options for people who provide services to wealthy local homeowners and ski-resort visitors. Without such housing, locals say, service workers would have to live far away in less glamorous towns just to afford the rent.

The article is illustrated with a photo of Gates standing in the snow outside the apartments.

The newspaper also reported that Gates was thinking about asking to be chosen as the builder of a nearby affordable housing project called Whetstone, which would require him to seek federal tax credit and subsidies from the Colorado state government. The only problem with that, Gates told the newspapers, could be that it would lengthen the project timeline too much.

The overall clash is striking: In Houston, a congresswoman may seek the federal government’s help to prevent half-Texas Gates from displacing seniors or drastically raising their rents. Meanwhile, half-Colorado Gates was considering taking federal money to build affordable apartments and just finished building one with units set aside for blue-collar renters. It’s unclear when Gates might consolidate his living arrangements and his business philosophy into single concepts. For now, the Texas lawmaker and his politics are partly tied to that other state. According to public records, the conservative Colorado Citizens’ Coalition, which he founded, shared a two-story building in Crested Butte with Action Adventures Snowmobile & ATV Tours and Rentals.