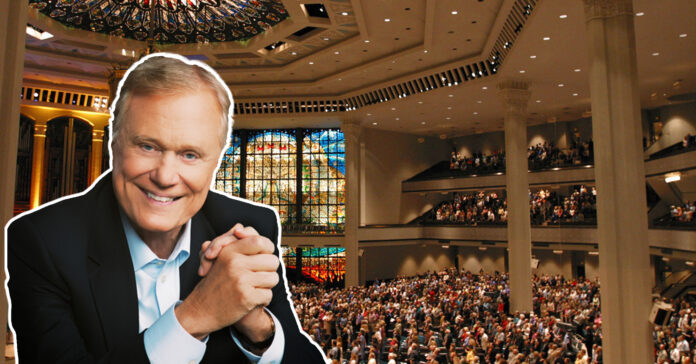 In a recent politicizing of local criminal justice conditions from the pulpit, Dr. Ed Young of Houston’s Second Baptist Church made misleading claims regarding crime rates in the city. “Houston in all probability right now is the most dangerous city in America to live in,” Dr. Young said in the sermon.” In addition, Young engaged his congregation in a targeted rebuke of Democratic local officials, and implicitly called for them to be defeated in the upcoming elections, according to the Houston Chronicle. This appears to border on a clear violation of separation of church and state as a tacit endorsement of their Republican opponents, not to mention IRS laws governing the tax exempt status of organized religions in the US.

At the center of Young’s comments as part of his new sermons series entitled, “The Church Awake,” is his criticism of Democratically backed 2020 bond initiative that allows for those defendants charged with misdemeanors to be released on low-cost or no-cash bail. However, according to Houston Public Media’s Florian Martin, there has been a backlog of misdemeanor and felony cases going all the way back to Hurricane Harvey’s impact on the local area, and the Covid pandemic is cited as a factor as well. This fact, as well as the multiple charges of different severities against the same defendants has blurred some of the statistical analysis.

This drew the ire of Houston Mayor Sylvester Turner, who stated on social media that not only is it untrue that Houston is not the most dangerous American city, but was critical of Young’s decision to make such a blatantly political statement in a sermon. A recent Reform Austin story by Jef Rouner regarding public safety said that “In fact, Lubbock, currently under the control of Republican Mayor Dan Pope since 2015, ranks as the most dangerous city for violent crime in the nation, with a jaw-dropping rate of 919 violent crimes per 100,000 residents. Between 2019 and 2020, the city experienced a 182 percent rise in homicides.”

KHOU 11 reported this week that as a result the Chair of the Harris County Democratic party, views this as a deliberate attack on Harris County and City of Houston Democrats, and is tantamount to campaigning for the Republican candidates opposing them. “‘Vote these bums out’ and talking about ‘the left-wing progressive,’ that’s already crossing the line because the opposite of that is voting for Republicans,” Evbagharu said.

The criticism from the right is nothing new, as GOP politicians across the country have made a habit of stating that all the most dangerous large cities are in democratically controlled states. This has become a popular refrain despite the fact that a recent Wall Street Journal article shows that crime in rural areas controlled by Republicans are seeing tremendous increase in crime rates. It cites an average increase of 25 percent in violent crime since 2020, only five percent less than urban areas.

According to The Atlantic magazine, this recent trend of conservative politics being espoused by evangelical clergy has caused many congregants to move to even more right-of-center houses of worship where such messages are regularly part of sermons. Despite this, the IRS has clear guidelines prohibiting political speech by religious organizations, as they enjoy a tax exempt status. In order to maintain that status, churches may not advocate for candidates.