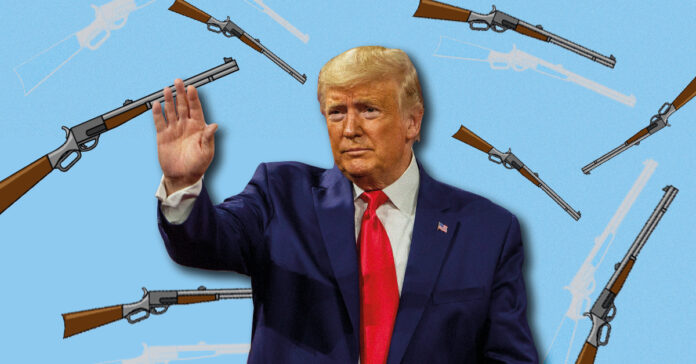 On May 27, Trump will speak to the NRA Institute for Legislative Action Leadership Forum, alongside Gov. Greg Abbott, State Sens. Ted Cruz and John Cornyn and U.S. Rep. Dan Crenshaw, as reported by The Houston Chronicle.

The lobbying arm of the NRA is NRA-ILA, and will be holding its annual convention in Houston from May 27 to May 29.

Trump’s relationship with the National Rifle Association goes way back to his first run for office in 2016, where they spent more than $30 million in support of his narrow victory.

The former President, who has called himself a “champion of gun rights,” also participated in the NRA convention in 2019, where he whipped out a pen onstage to sign a letter that would effectively cease America’s involvement in an arms treaty designed to regulate the international sale of conventional weapons.

He stated his administration would never ratify the Arms Trade Treaty, which seeks to discourage the sale of conventional weapons to countries that do not protect human rights, as reported by The New York Times.

Other measures Trump’s administration has taken toward gun rights include loosening regulations on the export of firearms and the online publication of technical information about guns, and reversing an Obama-era rule restricting gun purchases by people deemed by the Social Security Administration to be mentally unable to manage their affairs.

In a statement announcing Trump’s participation, NRA-ILA executive director Jason Ouimet said: “President Trump recognizes the Second Amendment is about liberties that belong to all Americans and knows that our right to self-defense is non-negotiable.”