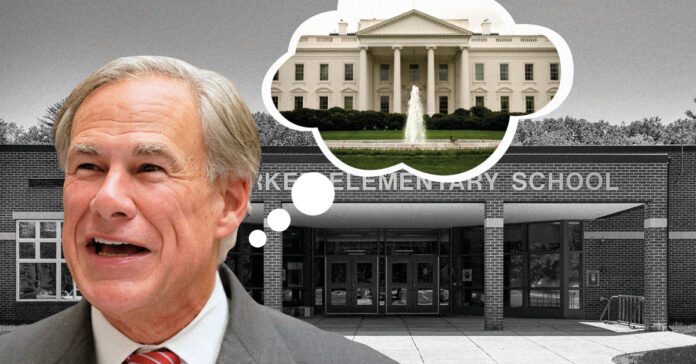 Texas Gov. Greg Abbott has one foot out the door, as he eyes national office in 2024. His calling to the White House might leave the rest of Texas politicians scrambling to clean up his mess, as his recent decisions veering the state to the far-right seriously endanger it.

Over the last year, Abbott has been clamoring to convince voters he is the most conservative, most Trump-like option available. He has led Texas Republicans through one of the most far-right sessions of the state legislature in decades.

Under Abbott’s wing, the GOP has cracked down mostly on right-wing priorities such as guns, abortion, critical race theory, strict border policies, and sweeping restrictions on voting.

His most recent fight focuses on Texas education when on Monday he voiced his support for private school vouchers – something with which most Texans disagree and which the Texas Legislature has repudiated for over twenty years.

“We can fully fund public schools while also giving parents a choice about which school is right for their child,” Abbott said during a campaign event in San Antonio. “Empowering parents means giving them the choice to send their children to any public school, charter school or private school with state funding following the student.”

As “simple” as Abbott might make it sound, the public education community knows better. The Texas School Alliance, an organization that comprises 44 of the largest school districts in Texas, tweeted their discontent.

“You can’t fully fund public schools and address the worst teacher shortage in Texas history by siphoning off public dollars to private schools. The math doesn’t work. This voucher scheme provides a tuition break for the wealthiest Texans who already send their children to private schools, while blowing a hole in public school budgets, harming more than five million Texas students. It is the last thing we should do following a disruptive pandemic.”

Abbott was never explicitly an avid supporter of school vouchers, which makes his sudden change of heart suspicious. Sources say it could be his way to appeal to donors outside of Texas. He may be following in Sen. Ted Cruz’s footsteps, who has been exploiting the issue among national donors to create a distinction with Abbott.

It’s becoming clear that Abbott has his heart set far away from Texas, his obvious courting of Trump and his allies along with his recent declarations supporting school vouchers, even though it badly hurts a large portion of his voter base, point to a change of priorities for the governor. After all, it wouldn’t be a surprise if he ends up joining Trump and runs for VP next election. Still, his actions will seriously damage Texans, and those who have shown up for him for over 2 election cycles will be left to pick up the pieces.