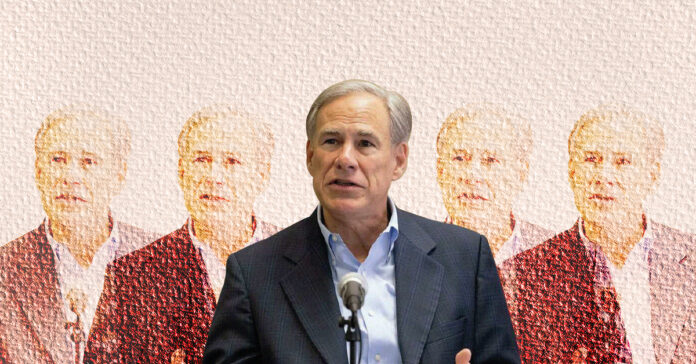 When Governor Greg Abbott announced the launch of Operation Lone Star in March of last year, it seemed to be just the latest in a long string of state-sanctioned border security theatrics. First, in 2005, there was former Governor Rick Perry’s “Operation Linebacker,” which sought to stop Al Qaeda terrorists and other criminals from crossing into Texas. Linebacker was then followed, consecutively, by Rio Grande, Wrangler, Border Star, Drawbridge, Strong Safety, and Strong Safety II. In 2015 came Abbott’s first gubernatorial border operation, “Secure Texas.”

Through these various missions, Texas has deployed state troopers and National Guard soldiers to the border to quell one threat after the next, costing tens of millions in state funds. The effects of these operations have been questionable at best, but they’ve made for plenty of great photo-ops for Republican politicians.

But Abbott has gone far beyond previous escapades—in cost, scope, legality, and political grandstanding—by usurping the federal government’s immigration authority with a state-controlled enforcement and detention apparatus. Soon after launching Operation Lone Star, the governor issued a disaster declaration in dozens of counties along the border and beyond, deeming the flow of migrants into Texas an “imminent threat” and granting him greatly expanded executive powers. He also unveiled plans—with former President Donald Trump at his side—for the state to build its own border wall, and for Department of Public Safety troopers to arrest and jail migrants on criminal trespassing charges. With little notice or planning, Abbott then ordered the state military to deploy a huge force of National Guard members to the border. Last summer, at his behest, the Texas Legislature rammed through a bill that would more than triple the state’s border security spending to roughly $3 billion, including $750 million for border wall construction.

Abbott’s actions have prompted a significant backlash. Amanda Woog, head of the criminal justice advocacy group Texas Fair Defense Project, called the governor’s scheme “a road map for any authoritarian ruler of any state to co-opt the criminal legal system and target it at perceived political enemies.” Civil rights lawyers have sued the state for violating the constitutional rights, en masse, of thousands of migrants who’ve been arrested and thrown into makeshift jails for months on end without attorneys or even court dates. Under pressure from far-right primary challengers and an insatiable Republican base, Abbott scrambled to get as many soldiers as possible to the border, totaling about 10,000. National Guard members have complained of being deployed on a mission without a clear end date or purpose. At the outset, the state couldn’t even get paychecks to many soldiers on time or ensure adequate housing and supplies for the Guard’s border outposts.

Abbott’s failures as a commander-in-chief eventually led to the departures of the state’s top military leaders in charge of the operation, including his commander of the Texas Military Department, Major General Tracy Norris, who left her post in March. Meanwhile, Operation Lone Star’s unprecedented size and scope have led to massive cost overruns. In January, Abbott commandeered almost $500 million from the state prison system to cover the National Guard payroll. In April, the new head of the Guard told state senators that those funds were about to run out and that it would need another $530 million to make it through August.

Pressed about the ballooning financial burdens of his state border scheme, Abbott blamed the Democratic president. “Because Joe Biden is not securing the border, the state of Texas is having to step up and spend Texas taxpayer money doing the federal government’s job,” Abbott said earlier this year.

Still, the governor and his law enforcement deputies have deemed Operation Lone Star an unmitigated success, boasting of more than 13,000 criminal arrests (mostly for trumped-up trespassing charges), thousands of pounds of drug seizures, and more than 200,000 migrants that state troopers and guards have referred to U.S. Border Patrol.

Yet, as a joint investigation by the Texas Tribune, Marshall Project, and ProPublica found, those claims of success are based on state law enforcement juking the stats. Reporters discovered that in coming up with their figures, DPS counted crimes that had no relation to the border, work done by state troopers in South Texas well before the operation, and drug busts and migrant apprehensions made in tandem with other agencies.

This isn’t the first time DPS has been called out for padding its numbers to justify its massive border-security budgets. Even before Operation Lone Star, Texas lawmakers had steadily ratcheted up spending on the state’s border dragnet, from about $110 million per biennium in 2008, up to $800 million per biennium in recent years. On top of the already significant federal border patrol presence, state enforcement efforts have turned the Texas borderlands into an even more heavily militarized police zone.

Abbott’s aggressive expansion of Operation Lone Star was a direct political response to a band of right-wing primary challengers that embodied the far-right, Trumped-up Republican base. For them, no step was too far when it came to the border and immigration, and each step Abbott took wasn’t far enough.

Many suspected that the governor was merely feigning far right to get through the primary and would ease back once he won. But, since wiping out his opponents in March, Abbott has kept his foot on the gas.

When President Biden announced in April his administration’s plan to finally revoke Title 42—the Trump executive order that slammed the door on asylum-seekers in the name of COVID-19—Republicans cried out of an impending “invasion” of migrants.

Abbott quickly said that, in anticipation, he was further expanding Operation Lone Star. Like the “steel wall” of DPS vehicles, military humvees, and shipping containers he assembled during the immigration crisis of late last year, now there would be DPS “boat brigades” to block migrants from crossing the Rio Grande. The Texas Military Department began a series of “mass-migration rehearsals”—the sort of military exercises that remind one of Jade Helm.

Abbott also ordered the state’s emergency management agency to charter hundreds of buses and flights to transport migrants whom federal immigration authorities have released from the border to the steps of the U.S. Capitol. The first bus arrived in mid-April, with camera crews waiting, right outside the Fox News studio in Washington.

Back at the border, Abbott also directed DPS to set up checkpoints right after the federal ports of entry and conduct enhanced safety inspections of every commercial vehicle entering Texas, ostensibly to find smuggled drugs or migrants that had slipped through. Predictably, this ground cross-border trade to a halt, with trucks backed up for miles in Mexico. One-by-one, Abbott met with the governors from the Mexican states that border Texas to strike deals: In exchange for vague promises of amped-up security measures on their side of the border, Abbott would end the DPS checkpoints.

The deals were announced in a series of side-by-side press conferences in Texas. Within a week, the safety inspections stopped. Of the roughly 4,100 trucks inspected, DPS found no drugs, migrants, or any other contraband. In the meantime, delayed truckers lost out on pay, thousands of pounds of produce spoiled, and international trade—the backbone of Texas’ economy—was ground to a halt. While Abbott touted the security agreements he secured from Mexican governors, likely worth less than the paper they were signed on, one estimate pegged the cost of the border stunt at about $4 billion.