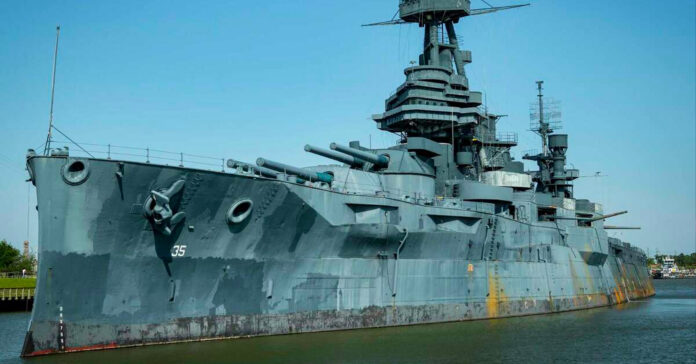 The USS Texas, the lone surviving ship in the “dreadnought” class in the US Navy made a successful journey to Galveston for repairs, marking the first time the ship had been moved from the San Jacinto Battleground State Historic site in La Porte, Texas. It was last moved 32 years ago after previous repairs had also been done in Galveston. Onlookers turned out to watch the 110 year old vessel being towed by tug boats to dry dock at Gulf Copper Dry Dock & Rig  in Galveston.

The 40 mile trip began in the predawn hours Wednesday moving through the Houston Ship Channel, and was the result of three years of planning to facilitate the move to make the repairs. The ship has been in danger of sinking in recent years at its home in La Porte, and was closed to the public in 2019. The hull of the vessel is rusting and requires constant pump assistance to stay afloat, bailing as much as 2000 gallons per minute. But it arrived safely in Galveston at approximately 4pm.

There were fears that the ship might not make the trip, but those fears were quickly pushed aside as it moved quite easily out of its previous home port and into the channel. Other boat traffic was halted to allow for safe passage. Foam was sprayed into parts of the hull to temporarily stop the leaks for the voyage, according to Tony Gregory, president and CEO of the Battleship Texas Foundation.

Texas Parks and Wildlife owns the ship, so the state approved $35 million to move and repair it in Galveston. The cost to scrap the vessel was reported to be $30 million, per  a Houston Chronicle article. So the state opted to save the historic piece of our nation’s naval history. However, Senate Bill 1511, signed by Governor Greg Abott in 2019, ends the state funding after the repairs and gives the ship’s responsibility to The Battleship Texas Foundation.

The foundation will then assume the cost to maintain the ship in the future. Originally the foundation had reported to the Houston Chronicle that it would move the ship after repairs to a new home in Louisiana, Alabama or Florida. But recent reporting indicates that a new home will likely be in Texas, in either Galveston or another port city.

The Texas, once nicknamed the “Mighty T” was launched on May 18th, 1912. The ship is the only remaining museum ship of the dreadnought class, the predominant battleship in the early 20th century. The class was named for Britain’s HMS Dreadnought. It had an immediate impact on naval capabilities and other ships were built with the same type of weaponry, including the guns still mounted on the ship today.

She first saw action in support of a US gunboat detained by Mexican troops in Tampico, Mexico, and she is the only surviving US naval vessel to have seen action in both world wars. It was the first US battleship to have anti-aircraft guns and the first to launch an aircraft. It was also one of the first to be equipped with radar. It fought in some of the most historic battles in world history, making its way to Normandy for the DD Invasion before making its way to the Pacific Theater for the Battles of Iwo Jima and Okinawa during World War II.

It was the first US battleship to become a permanent museum, and the first to be declared a US National Historic Landmark. When launched it was the most powerful weapon in the world, according to the battleship’s foundation. It was heavily armed, with a  main battery consisting of  ten 14-inch guns with armor piercing capability, with a range of 13 miles. It also had a secondary battery of 21 five-inch guns, as well as 21 torpedo tubes. It also had 12 naval defense mines.

Multiple media outlets reported hundreds of area Texans showed up Wednesday to watch the historic ship’s move on Wednesday. Veterans and wellwishers were thrilled to see the ship in action, even if it was not under its own power. It has been a symbol of Texas and American pride since its launch, and has remained so to this day despite being out of commission since 1948.