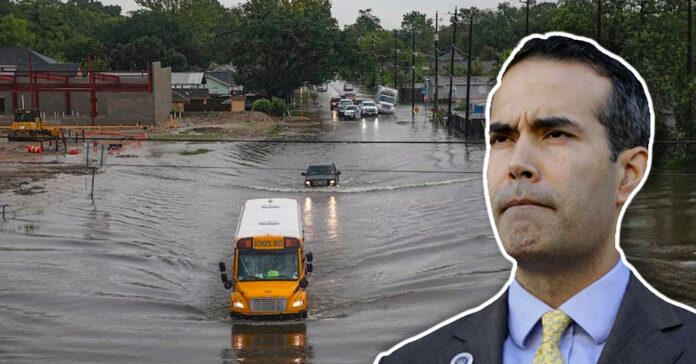 The latest news in an ongoing battle against the Texas General Land Office is actually a win for local advocacy groups who sought justice for the allocation of the Harvey funds awarded to Texas.

The U.S. Department of Housing and Urban Development confirmed the advocates’ allegation that Land Commissioner George P. Bush’s agency “discriminated on the basis of race and national origin through the use of scoring criteria that substantially disadvantaged Black and Hispanic residents,” when it denied flood mitigation aid last May to the areas hardest hit by Hurricane Harvey.

In 2018, Texas was awarded more than $2 billion in federal funds, to pay for projects aimed at moderating the effects of future storms. Bush’s agency held a competition to determine who the recipients of the funds would be because there was not enough money for all 49 eligible Texas counties.

However, the criteria that scored the counties were classified as unjust, dismissing the areas that were most affected – Houston and Harris County expected to receive at least half of the funds and initially were rewarded nothing.

“The City of Houston and Harris County, which suffered 50 percent of the damage from Hurricane Harvey? The GLO process awarded nothing,” said Mayor Sylvester Turner, in written testimony to the U.S. House Subcommittee on Oversight and Investigation.

“This clown car must be stopped.”

After receiving pressure, GLO attempted to repair some of the fallout by awarding $750 million to Harris County, but still nothing for Houston, which was still an “unconscionable” amount that was not sufficient to address the extensive mitigation needs of the area.

It is still unclear when and if that money will arrive since the feds have not yet approved the state’s amendments to its plan.

According to The Houston Chronicle, the federal agency found two decisions it said had disproportionate impacts on communities of color.

HUD said the scoring metric penalized large jurisdictions, such as Houston, by measuring what percentage of an applicant´s residents would benefit from a project.

“The City of Iola applied for a project benefiting 379 people. This project received 10 points out of 10, because Iola has only 379 residents,” the finding raised as one example. “The City of Houston applied for a project benefiting 8,845 people in the Kashmere Gardens neighborhood. This project received 0.37 out of 10 points because Houston has approximately 2.3 million residents.”

HUD also said the GLO unfairly divided the competition into two uneven categories: the most impacted and distressed areas that included Houston and Harris County; and more rural counties that also got a presidential disaster declaration, as reported by The Houston Chronicle.

Both categories fought for separate pots of essentially equal money – $500 million for the most distressed and for counties added by the state.

However, the most distressed areas have around 8 times as many residents than those identified by the state. They also had 90 percent of the minority residents in the entire eligible population.

Harris County Judge Lina Hidalgo, said minority communities have been overlooked for too long when it comes to preparing for disasters.

“It’s not complicated: Harris County was ground zero for the heartbreaking impacts of Hurricane Harvey, and continues to be exceedingly vulnerable,” Hidalgo said. “The share of mitigation funds we receive from the federal government should reflect that reality.”