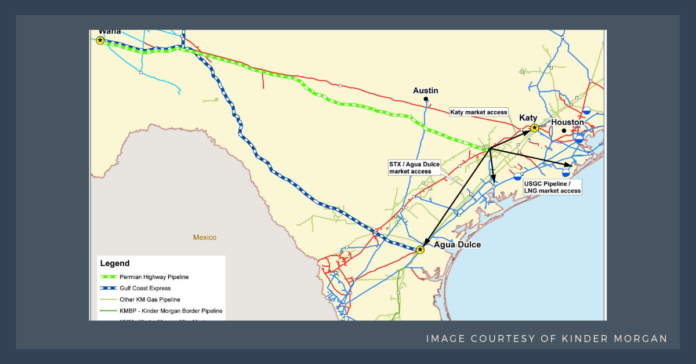 After a year of protests, town meetings and news story after news story, crews are about to break ground on the Permian Highway Pipeline. Despite an October start date, some Texas residents and lawmakers are still fighting to stop the project.

Although the proposed pipeline is only one of six Permian Basin pipelines expected to come online before the end of 2020, the PHP is by far the most high profile and controversial.

Since Kinder Morgan and EagleClaw Midstream Ventures announced the $2 billion, 42-inch natural gas pipeline in September 2018, it’s been a flashpoint.

The project has pitted roughnecks from Midland against ranchers from Medina, engineers from Houston against environmentalists from Hondo.

Industry analysts see the 2 billion cubic feet per day pipeline as a key component in increasing the Permian Basin’s takeaway capacity and alleviating a bottleneck in the most oil producing region in the country.

Part of the pipeline’s 430 mile route takes it through the Texas Hill Country, where widespread opposition to the project has drawn anger and lawsuits from concerned landowners and conservationists.

State Rep. Erin Zwiener, who represents District 45, recently laid out her problems with the PHP in a Tribtalk article on the subject.

“The proposed Permian Highway Pipeline bisects my district, crossing through or near the cities of Blanco, Wimberley, Woodcreek, Kyle and San Marcos,” Zwiener wrote. “All of these cities have passed resolutions asking the Legislature for more protections and oversight when privately owned pipelines use the power of eminent domain.”

Opposition to the pipeline stemmed from the fact Kinder Morgan didn’t get “input from local elected officials, environmental assessments, economic assessments and public comment,” according to Zwiener.

Hill Country residents and elected officials have been duking it out with Kinder Morgan in court for the last few months. In June, Judge Lora Livingston of the 261st District Court in Travis County dismissed a lawsuit brought against the Texas Railroad Commission,the Texas agency in charge of oil and gas pipelines.

The lawsuit attempted a sort of pretzel bender of an argument. The plaintiffs, which included a coalition of landowners, Hays County and the city of Kyle, acknowledged that private pipeline companies have eminent domain authority — something outlined in the Texas Constitution.

However, the lawsuit claimed that the opacity of the process Kinder Morgan used to exercise its eminent domain was illegal. The plaintiffs went on to ask for a moratorium on the use of eminent domain by pipeline companies until a more rigorous and public process could be adopted.

In her judgment, Livingston expressed sympathy for the plaintiff’s position, but she wrote she was dismissing the suit because it’s not the court’s role to “dictate the policy of the state.”

The suit argues that the pipeline company and the federal agencies conspired to do an end run around the endangered species act in a “thinly-veiled attempt to avoid obtaining the necessary federal permits to allow [Kinder Morgan] to lawfully ‘take’ federally listed endangered species during the construction, operation, and maintenance of the PHP.”

Court actions and legal opposition to the pipeline hasn’t been limited to Hays County. Over in Johnson City, a three-member panel of the Blanco County Special Commissioners ordered Kinder Morgan to pay three landowners more than $2.7 million to seize parts of their properties.

Despite the setbacks and lawsuits, Kinder Morgan, still expects the Permian Highway Pipeline “to be in service in late 2020, pending regulatory approvals.”