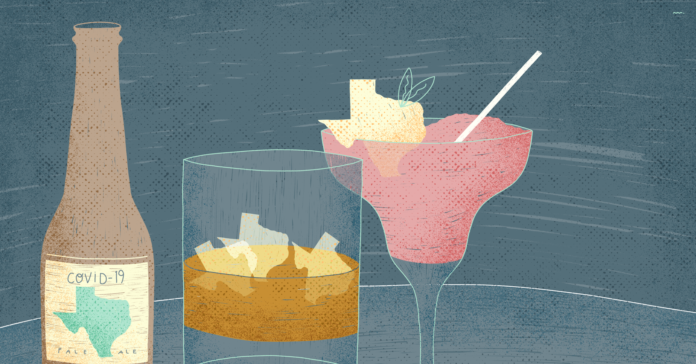 Texans are sheltering in place and … drinking?

In fact, Texas is leading the country in alcohol consumption.

Seriously Smoked, a website dedicated to cooking and grilling, used Twitter geotagging to gather more than 200,000 tweets that include relevant keywords, phrases and hashtags all related to alcohol consumption.

Texas, to the surprise of few, was found to have mentioned instances of drinking the most out of every other state.

With Texas’ major cities issuing stay-at-home orders and enforcing restrictions on most in-person businesses, liquor has been deemed an “essential” retail in the state of Texas and will remain open.

In fact, Texas’ liquor retailers have seen a major boom in alcohol procurement.

Tito’s, Austin’s Twin Liquor and Spec’s pointed to a major uptick in online liquor sales in the previous weeks.

In addition to online and brick-and-mortar liquor store sales, restaurants are partaking in a portion of Texas’ liquor sales. Due to a temporary waiver issued by Gov. Greg Abbott, restaurants are now legally able to deliver alcoholic beverages to-go for their customers as a way to ease the loss of revenue felt by Texas’ hospitality industry.

In recent years, Texas has undergone a 180 when it comes to liquor legislation.

Until 2013, Texas craft breweries and brewpubs weren’t able to sell beer on their premises, and distilleries were unable to sell samples of their product.

In the most recent legislative session, the state relinquished its status as the only one in the country that prevented consumers from buying directly from breweries.

While perceptions of alcohol consumption are socially tied, during this public health epidemic, self-imposed isolation for many Texans, it seems, may include a beverage.

A collective cheers to all of those in isolation, but please be sure to drink responsibly.