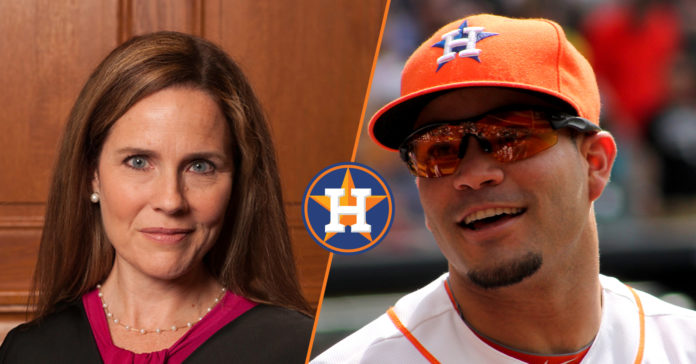 What do the Houston Astros have to do with the confirmation hearings for U.S. Supreme Court nominee Amy Coney Barrett now underway in Washington? Nothing, but that didn’t stop Nebraska Sen. Ben Sasse from bringing them up during confirmation proceedings Wednesday.

“I think all baseball fans know the Houston Astros cheat,” Sasse said, with apologies to Texas Sens. John Cornyn (R-Houston) and Ted Cruz (R-Houston). “They steal signs, they bang on cans. They’ve done a whole bunch of miserable things historically, and they deserve to be punished probably more than they have been.”

Cornyn was quick to jump in, saying, “Thank goodness the First Amendment protects that right for him to express that erroneous opinion.”

It was Sasse’s tongue-in-cheek attempt at calling out his Democratic colleagues for their line of questioning of Barrett and their push to get her to say how she might rule on future cases regarding abortion or the Affordale Care Act.

“I think some of what we’ve seen in the questions over the last three days are trying to get an umpire to agree to a different set of rules for different teams,” Sasse said.

“Senator Ben Sasse, Nebraska, took time at the hearing to call out the Houston Astros as cheaters,” Houston Mayor Sylvester Turner tweeted. “What do you call the Senate majority that is going against its own principles to rush through an appointment while people are already voting. What a hypocritical lesson for kids.”

Turner followed up with another tweet in which he said there would be no Texas barbecue for Sasse.

An investigation by Major League Baseball found the Astros employed a sign-stealing system to win the 2017 World Series. The team is currently playing the Tampa Bay Rays for the American League Championship and a revenge trip to the World Series. They head to game 5 tonight.