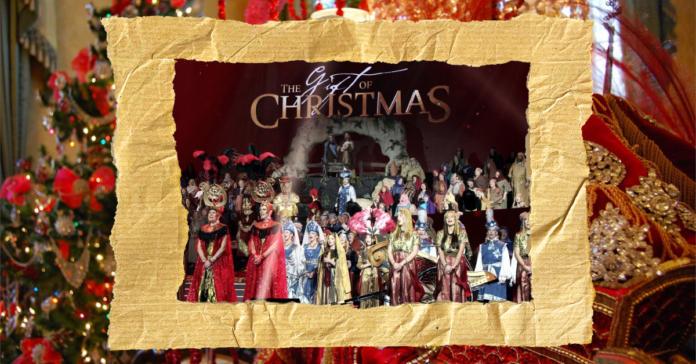 The Prestonwood Baptist Church in Dallas is weathering a viral backlash thanks to their enormous “Gift of Christmas” production. A video posted on TikTok showing the famous flying Little Drummer Boys in rehearsal has racked up over 2 million views. The caption is a sarcastic “casual Christmas worship in Texas.”

For decades, “The Gift of Christmas” has been a blockbuster production that is to your local church’s nativity play what Cirque de Soleil is to a street juggler. Running roughly 100 minutes long, it features the aforementioned drummer boys, a flying Santa Clause, live camels, state of the art digital backdrops, more than a thousand performers, a Baby Jesus animatronic, ice skating, a kick line, and more. The event is watched by 75,000 people worldwide. Tickets for the in-person show cost up to $59.

Obviously, such a production is not cheap. The church does not publish figures on the cost, and those in charge seem to dodge questions trying to hammer down an actual number when asked. As of 2017, Michael Neal, lead worship pastor, says the show is supported entirely through ticket sales. The fact that the church can draw on thousands of volunteers also helps keep the cost down.

Nonetheless, the spectacle has rubbed some people the wrong way as increased scrutiny over megachurches has Texans questioning whether those resources should be spent on lavish entertainment.

“Gimmicks are not needed 2preach the Gospel,” said one detractor on Twitter. “That’s why I left Prestonwood with several elders when the fundraising started for leaving the Hillcrest location. He said 2go into the highways and byways and compel them to come in. He didn’t say to build bigger more ornate buildings.”

“How much did those tracks and pullies cost to fling drummers through the air?” asked another. “How many hungry people could that have fed? What’s the lighting budget look like?”

Prestonwood responded in a statement, saying that they were merely “pulled out all the stops in celebration of the birth of Jesus Christ during the Christmas season.”

“At Prestonwood, we believe Jesus deserves our absolute best, especially at Christmas,” a spokesperson told The San Antonio Express-News. “It’s unfortunate that the perennial American tradition of the church Christmas program now draws hateful ire from some. We pray that they, too, may come to know the joy of Christmas and the love of our Savior.”

According to federal tax law, a massive production like “The Gift of Christmas” is not prohibited so long as it is not being used for individual profit. Critics point out that time and resources could be better spent. However, Prestonwood already funnels a great deal of money to Pregnancy Crisis Centers, which the American Medical Association calls unethical. An overblown Christmas pageant might be gaudy, but at least it’s not part of a network of centers that pretends to be clinics for pregnant people in need. Prestonwood is especially egregious in this category, using a stylized P in their logo that makes it look they are associated with Planned Parenthood.