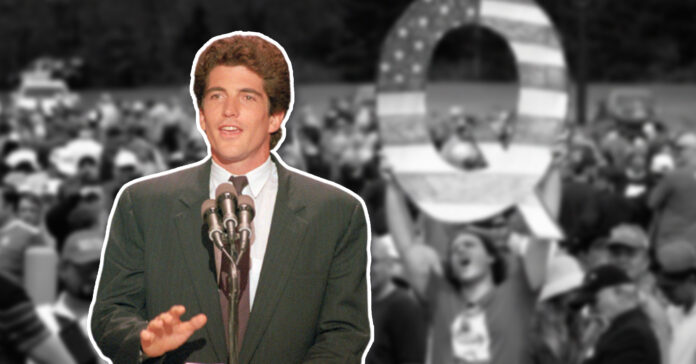 It’s no secret Texans love a good, juicy, conspiracy theory. We saw it with the Jan. 6 capitol riots – were more than three dozen Texans were arrested and charged – and we are seeing it now with the arrival of anonymous poster “R”, who incepted the idea that JFK Jr. faked his death to avoid being targeted by members of the deep-state conspiracy.

It’s one thing to believe in electoral fraud caused by “radical-left Democrats”, but to assume John F. Kennedy Jr., who passed away in 1999, will resurrect in downtown Dallas just to reinstate Trump, is stretching it too far, even for QAnon supporters.

With apparently a lot of free time on their hands, dozens of QAnon conspiracy theory believers still remain in Dallas. Having arrived on Nov. 2 – the supposed date of JFK Jr’s resurrection – the group is unwilling to leave until he reveals himself… 20 years after his death…  in the city where his father was assassinated, of all places.

While their beliefs might seem absurd, the devotion and loyalty of this group to their leader – Negative48, aka Michael Brian Protzman, who amassed a following on social media with his version of gematria – can be alarming, and is a cause of concern, according to an expert who has followed QAnon for years.

“I think what you’re seeing here is really, undeniably a cult,” said Mike Rothschild, author of The Storm Is Upon Us, which chronicles the rise of, and fallout from, QAnon.

“There is absolutely behavior control and thought control, he’s having people stand in straight lines to have conversations. He’s telling people when to go outside, when to look up, when to look down. It is unquestionably the behavior of a cult leader.”

According to The Dallas Morning News, Negative48 is fringy even for the more mainstream QAnon conspiracy theory believers, which is based on the premise that a cabal of liberal celebrities and politicians partake in a child sex-abuse ring and will be executed upon Trump’s reinstatement.

Even though Negative48 believers seem to be a gullible and passive group, they should not be dismissed. They might not be an immediate threat, but are an example for how behavior can be easily influenced.

“If you’ve been in Dallas for weeks waiting for JFK Jr. and Michael Jackson to come back, what do you do when you go home to your family? Do you say, ‘Sorry, I was wrong?’ You stick with it,” Rothschild said. “And the longer it goes on, and the deeper you get into it, the harder it gets to get out of it. That’s when there is a potential for harm and for violence.”

At the moment, there is still no sign of JFK Jr’s return, but Negative48 followers don’t lose hope.