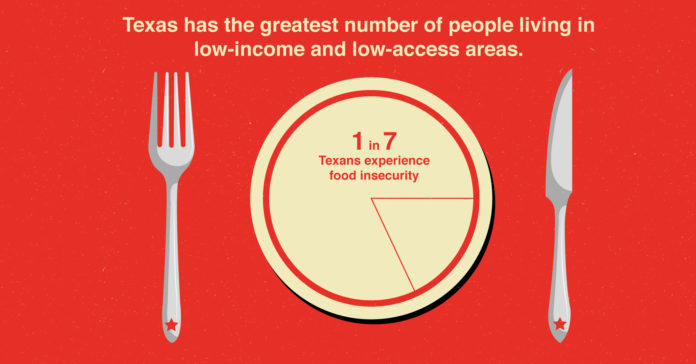 When H-E-B opened its MacGregor grocery store in Houston in December, it changed lives.

The storefront is a new beginning for area residents who previously had limited access to supermarkets and now have more food options after a nearby Kroger closed in 2017. The residents of the historically predominantly African American neighborhood can now purchase their fresh produce and other grocery needs with ease. Unfortunately, simple grocery shopping for healthy food in 2020 shouldn’t be such a difficulty, or a wait, but it is in Texas.

“Food desert” is a term that has grown in popularity over the years, for areas where there’s a grocery store shortage, or when a grocery store shuts down and causes limited access to nutritious food, which affects the health of the community, especially for those without an automobile.

Feeding Texas CEO Celia Cole weighs in, “Texas has the greatest number of people living in ‘low-income and low-access (LILA)’ areas — at 5 million — and ranks sixth in the nation for the highest percentage of its population living in LILA areas at 20 percent.”

Sadly, one in seven Texans experiences food insecurity, according to Feeding Texas, a nonprofit formerly known as the Texas Food Bank Network. Texas is also one of 15 states with higher food insecurity than the national average.

In reference to the grand opening of MacGregor market, Scott Packard, Houston Health Department Chief Communications Officer told Reform Austin, “we consider the H-E-B MacGregor grocery store to be a great success. The reaction from the community seems to be overwhelmingly positive. Many people in this community have transportation barriers that make it very challenging, sometimes impossible, to make it to a grocery store many miles from home.”

When asked about other recent changes to communities in Houston without access to grocery stores, Packard said, “our department has conducted a few recent community assessments in the Kashmere Gardens and Fifth Ward communities. These communities also experience challenges with access and proximity to healthy food options. It’s difficult to predict where food deserts will become better or worse. To predict forward, we would have to analyze trends in community developmental patterns, housing cost, displacement, wages and other social-economic factors.”

An estimated 724,750 food-insecure individuals live in the Greater Houston area, according to the key findings from a 2019 research report from the Kinder Institute for Urban Research on food insecurities. Potential remedies arising from the research include, “funders, government policies, the mindset of altruism and backbone organizations that require them to adopt to policies, processes and mindsets that encourage collaborations, promoting flexibility of operations and adopting more behavioral metrics while eschewing competitive actions.”

Packard said that addressing food deserts takes a collaborative approach between the public and private sectors, and there are companies in Houston doing great work like building gardens in communities that don’t have access to fresh produce.

Food Deserts Are a Public Health Issue in Texas

Today the phrase “food desert” is well-known because it describes a big public health issue. Usually the closest food source is what influences an individual’s or family’s food choices, and limited access to nutritious food causes concern for health issues and illnesses, with the greatest negative health effects happening to the elderly and children. In Texas, 14.3% of children live in food-insecure homes.

Regarding the importance of healthy eating habits for children especially, as what children eat when they are young can become a foundation for their eating habits throughout their life, the Texas Agriculture Commissioner Sid Miller told Reform Austin, “Texas agriculture is fundamental when promoting local foods.”

“The goal is to not only provide locally sourced and healthy meals for school lunches but to pass those healthy lifestyle changes along to students for each meal they choose,” Miller said. “I want all Texans to make health conscious decisions that will sustain local economies and build a healthier future for the great state of Texas.”

What we eat and the access to healthy foods can greatly affect our lifespan, Shelby Massey, Government Relations Director for the American Heart Association, told Reform Austin, “When people lack access to healthy, affordable food, they are at a higher risk of developing chronic diseases such as type 2 diabetes and heart disease. Cardiovascular disease is the leading cause of death in Texas and in the United States, but is eighty percent preventable by maintaining a healthy lifestyle. Access to healthy, affordable food close to where a person lives greatly impacts their ability to make healthy choices.”

Packard pointed out an economic effect.

“The lack of fruit and vegetables can manifest as chronic diseases in young children, families and the elderly. Managing diseases, prescribing medications and related sick days from work all affect the economic productivity of a community,” he said.

“From a well-being standpoint, we envision a community where people are free from the impacts of chronic diseases, it begins with creating an environment where making the healthy choice is feasible and easy to do for families in Texas.”

This past fall, data in a report called the Community Health Needs Assessment, by the Parkland Health & Hospital System and the Dallas County Health Department identified the geographic areas and populations that experience the most significant health disparities and most unhealthy locations of the city.

The Dallas Morning News reported the next step is to tackle the issues of health disparities piece by piece, “with a more specific focus on chronic illnesses and other ailments such as pediatric asthma, breast cancer and mental health.”

On the topic of food deserts reflecting a community’s health, Feeding Texas’ Cole adds,“Texans living in food deserts face significant barriers to healthy eating, including a lack of financial resources. This can lead to diet-related illnesses and poor health outcomes and drive up state health care costs.”

Not every food desert will get a gorgeous 90,000-square-foot H-E-B for their grocery demands.

“For example, if the store isn’t accessible for someone because they don’t have reliable access to a vehicle or it isn’t served by transit, we can’t say we’ve solved their food access problem,” she said.

There is where Parks said smaller, neighborhood-scale stores can be extremely helpful in serving these kinds of areas.

“Austin has a history of inequality and disinvestment in neighborhoods historically populated by people of color, and the current food retail environment reflects that history. The City of Austin is working now to support grocery store expansion in underserved areas, but that work is also part of a broader portfolio of food access work,” Parks said.

Understandably, grocery stores want to make a profit and serve as many people as they can. However deciding where or where not to open a store can help or drastically hurt a community.  Several years ago when the City of Dallas offered $3 million to any store that would open a large full service grocery store in food desert areas that really could use it, the city received no takers.

In 2017, during Texas’ 85th Legislature, The Texas Grocery Access Investment Fund, HB 164, failed to pass, it would have provided funds to encourage companies to open grocery stores, mobile markets and farm stands in low- and moderate-income areas to increase access to healthier foods.

When it comes to finding a solution to food deserts, Packard, of the Houston Health Department, said, “Strategies that can make a difference in these areas include alleviating transportation barriers, improving food incentive programming, increasing culturally appropriate health options. These are ideas and best practices that should be integrated into a comprehensive approach to equitable food access.”

Cole, of Feeding Texas, shared with Reform Austin that numerous solutions to get food into these deserts are being piloted and some of the more effective are coming from grassroots initiatives working directly with the communities they serve.

“In Texas, food banks have adopted these primary approaches to improve access to healthy food and move the needle on healthy eating,” Cole said.

These include Feeding Texas, which administers a state grant called “Texans Feeding Texans” that rescues surplus produce from Texas growers that would otherwise go to waste and distributes it to needy families.

Nowadays convenience stores and gas stations sell fresh fruit and vegetables, and when located in a lower-income area, these hubs can be a major force to provide more nutrients to people who live nearby.

For some areas where the option of a supermarket or walkable farmers markets is slim, it’s taking do-it-yourself nonprofits to fill a void. In southern Dallas, a local nonprofit, Feed Oak Cliff, in a neighborhood that lacks fresh groceries is providing healthy options, and it started with the founder’s own desire for more salad spots in her neighborhood. Previously she had driven twelve miles to get a salad. Imagine carrying and trekking your groceries back home on foot. How many bags could you carry for a mile? Imagine driving over ten miles or more just to get a simple fresh salad or fresh fruit that every Texan should be able to enjoy and be nourished from.

Back in the Bayou City, Packard provides a view of how a grocery store can become the heart of a neighborhood that needs it most.

“This new H-E-B store is right there in the community, more accessible to more people. In terms of community health, a grocery store in a community has countless benefits. The anticipated benefits could range from improved quality of life, increased access to foods, increase social connectedness, and improvements in many other health indicators. A grocery store is a part of the fabric of a community, the benefits will be more pronounced three to five years down the line.”