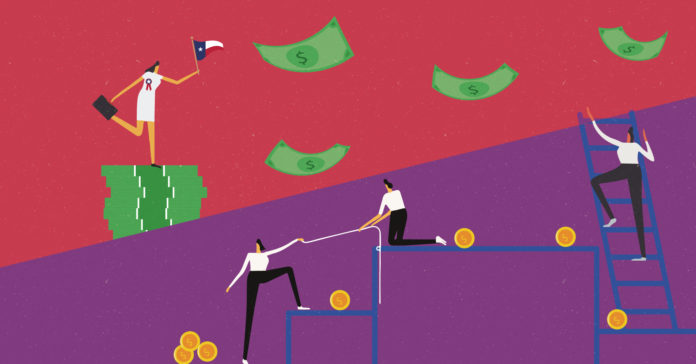 Everyone bemoans the influence of money in politics, but candidates face a brutal truth: If you don’t raise enough money to run a campaign, you risk voters never hearing you or your message.

While most politicians agree that something needs to change when it comes to campaign finance, all concede that in order to get elected and be in a position to champion reform, fundraising is a necessary evil.

Annie Garcia, one of the many Democrats running in the primary for John Cornyn’s seat in the U.S. Senate, made a calculated decision to run a very different race, and she’s not waiting until she wins to propose a new game.

Doing advance work in the late 1990s for New Jersey Senator Bill Bradley’s presidential campaign, Garcia listened in as he made donor calls in between events. She sounds equal parts indignant and astonished as she shares stories from her time on the campaign trail.

“It’s my understanding that the recommendation is for a candidate to spend half their time fundraising. I tried to do that one day. Everyone I was calling was on someone else’s list.”

“I know this is what I’m supposed to do,” she admits, “but this doesn’t make sense. I am taking on conventional wisdom, turning it on its head, because what I want to come out of this is a new playbook for people who want to jump into politics.”

Garcia talks through her decision-making process. The Federal Election Commission defines a candidate as someone who has raised or spent $5,000 in pursuit of an elected office in a campaign cycle. Crossing that threshold triggers a cascade of filing and reporting requirements.

“The only thing between me and running—getting my name on the ballot—was $5,000. That was a number our family could work with.”

Garcia and her family are working. Her husband acts as her webmaster, and she drafts her own position papers and speeches. Soon, she’ll be walking as she works. This Sunday, she’ll walk to a Tex-Mex restaurant just north of downtown Houston and kick off a 420-mile walk across Texas showcasing the issues that are motivating her to run.

Until reform happens, however, candidates who aren’t as committed to upending the system do have the option of following a very traditional political fundraising strategy.

The balance of time spent on activities varies, but, as one very experienced advisor to federal campaigns points out whenever a candidate complains about raising money, there is a system, and it works if you work it.

In order of effectiveness, the traditional cornerstones of political fundraising include:

Rep. Anna Eastman (D-Houston), who now represents Texas House District 148 after her win in the January special election, has followed a more traditional fundraising path, spending time on the phone. She also raised the most money of any candidate in her race.

Eastman appreciates the opportunity fundraising calls give her to connect with voters, but she far prefers talking to people at the door when she is asking strictly for their vote, not their dollars.

“I spend the majority of my time block walking. Even if I don’t connect with a voter at each door, people see me out there, they notice, and they talk about it with other voters. People love realizing that I’m actually the person in the photo on the flier I hand them.”

Garcia and Eastman are taking very different approaches to fundraising. Super Tuesday’s results will shed light on how those approaches translate into votes.

Garcia will also be evaluating her success, however, on who might find the courage to jump into a subsequent race without letting money be an insurmountable barrier and without playing the game everyone is expected to play.

She sees her campaign as bigger than just one race. She wants to see other women get into politics, and show them that it can work to bring their authentic selves and buck conventional wisdom.

“Only rich people are entitled to govern? That is fundamentally what is wrong with our country in so many ways. If I can get myself into a primary for less than $100,000, then we should be able to figure out how to do these smaller races for a lot less.”