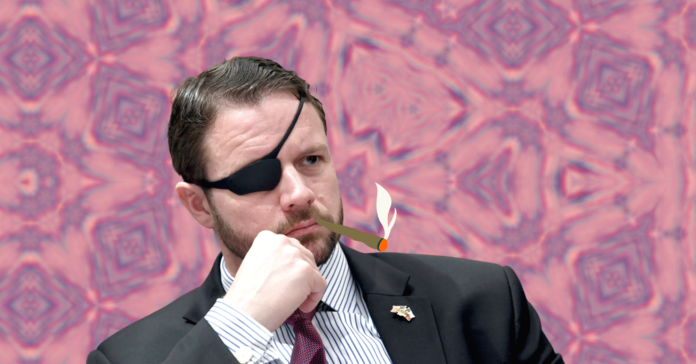 On Tuesday, Rep. Dan Crenshaw, whose legislative record up until late has largely been unfriendly to drug policy reform matters, pushed a psychedelic research amendment that was approved by The House of Representatives.

According to Marijuana Moment, one day after nine drug policy amendments to the National Defense Authorization Act (NDAA) were submitted for consideration by the House Rules Committee, the chamber voted in favor of the initial package of measures.

Crenshaw’s amendment would allow the secretary of defense to approve grants for research into the therapeutic potential of certain psychedelics such as MDMA, psilocybin, ibogaine, and 5–MeO–DMT for active-duty military members with PTSD.

As a veteran himself, Crenshaw said on the floor Wednesday, that there have been significant advancements in therapies for veterans who suffer from mental health conditions, but “we can’t allow that celebration to turn into complacency” and “we must push forward.

He also said that his amendment to facilitate studies into the medical potential of psychedelics will help pave the path toward a “new and innovative way to treat our service members, and give them a chance to continue to serve while taking part in treatment that can help them function not just in uniform, but in life.”

“We should not be forcing our service members or veterans to use nonprofits and go down to Mexico to get this treatment to save their lives. We should be looking into it, at least, ourselves.”

On that note, the House also passed two amendments that advocate for medical marijuana use.

The amendment sponsored by Rep. Alexandria Ocasio-Cortez (D-NY), seeks to study the therapeutic potential of marijuana as an opioid alternative to treat service members diagnosed with PTSD, traumatic brain injuries, and severe pain. While Rep. Rashida Tlaib’s (D-MI) amendment would require the Department of Defense to study the “historically discriminatory manner in which laws related to marijuana offenses have been enforced, the potential for the continued discriminatory application of the law (whether intentional or unintentional), and recommendations for actions that can be taken to minimize the risk of such discrimination.”

As one of the more influential GOP representatives in the State, Crenshaw’s views on illegal substance research open the door not only for psychedelics but also for Marijuana. Like Crenshaw said: “Our service members should not need to go down to Mexico to get treatment.” This can easily translate to any Texan who needs to cross state lines to receive any type of medication or treatment.

“We should be looking into it, at least, ourselves.”