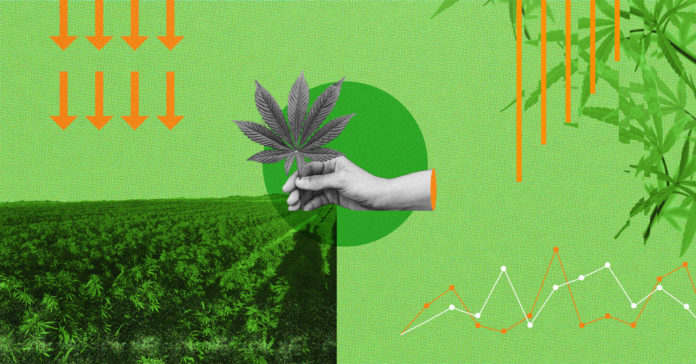 There were some very big numbers bandied about when the Texas legislature paved the way for hemp to be grown in the state, with some predicting earnings of up to $40,000 an acre. The reality is that hemp farming has fallen far below such lofty promises.

Despite the nationwide interest in CBD oil for everything from chronic pain to pet anxiety, the hemp market has flattened considerably. Calvin Trostle at Texas A&M AgriLife is the school’s hemp specialist, and he’s seeing the bubble burst for a variety of reasons.

“Prices available to growers are down 85 percent from the 2019 season,” he said. “Nationwide, in spite of new states like Texas coming on the permitted acreage was down 29 percent from 2019.”

In the first year that hemp was cleared for growth, Texas approved 5,500 acres for the crop, and by Trostle’s estimate, somewhere between half and three-quarters of it was planted. Texas farmers quickly ran into some unforeseen difficulties when it came to growing. Increased sunlight, torrential rain, and the scorching Texas heat have taken their toll on the crops of various growers. Many are waiting until the temperatures cool in the fall to try to replant, but it’s been a stark reminder that Texas is not as welcoming to hemp as states like Colorado and Kentucky have proven to be.

“For every grower that made it big, there are seven that didn’t,” says Trostle. “There is a lot more to hemp than just putting cotton seed in the ground and letting it do its thing. I think a lot of people are realizing this isn’t the panacea we thought.”

Part of the problem is that Texas is very late to the hemp game. Hemp growing was part of the Federal Farm Bill in 2014, but the Lone Star State declined to become involved at that time. Other states did and reaped the benefits of getting in on the ground floor of a hot new crop.

The other problem is that America simply doesn’t need that much hemp. Ten pounds of hemp produces 7.5 pounds of oil, the most profitable application of the crop. With more than 500,000 acres of hemp approved for planting in the country, the flattening of the profitability curve was inevitable. Now growers are looking into contracts with buyers for other uses, such as rope.

“I remember seeing projections for the cannabinoids that showed a pretty sharp increase from one year to the next, but it has flattened off,” said Trostle. “I think medical research has loosened and that may identify some new prescriptive uses, but some of it was just a fad.”

One problem specific to Texas is a complete lack of processing. As of right now, there is no place in the state for hemp to be processed into oil, gummies, and other products. Not having a contract with a dedicated buyer is a risky business for farmers. One of the few facilities slated to open this fall is the Bayou City Hemp Company in Houston.

“Processing is critical to making this a successful business in Texas,” said CEOs Ben Meggs and Jeromy Sherman. “That’s why we started this processing plant. We want to help the farmers as much as we can.”

The company considers this to be an “R&D year,” and feels that most farmers did not expect the enormous yields that may have been bandied about in the Texas legislature. Nonetheless, processing is in a bottleneck nationwide, and Texas’ lack of an infrastructure for this crucial aspect is understandable.

“It is extremely capital intensive to do it right and stay within regulatory guidelines,” said Meggs. “It also really takes an intelligent team to run this manufacturing equipment. We were able to bring people back to Houston who have worked in the industry from other states like California and Oregon.”

The rough start doesn’t mean that the future of hemp in Texas is doomed. The Texas Department of Agriculture points out that there are over 800 active permits including more than 600 hemp lots and 11 million square feet of greenhouse space dedicated to the crop across Texas since March. Of course, these numbers reflect the beginning of the growing process, not the yield or profits.

“I do not accept your premise that hemp production is sluggish,” said communications director Mark Dallas Loeffler.

For Trostle, he sees even the failed crops as valuable experience for the next round of hemp growth. There are still many farmers dedicated to the possibilities of a robust Texas hemp industry.

“They knew there wasn’t money to be made this year, but the experience has some value,” Trostle said. “It can help them decide if they want to go forward. I’ll be looking forward to hearing what people would do differently, and what worked for Texas. I think anytime you have these types of outsized projection numbers you have to be cautious. On one hand, they were accurately reporting other states, but any economist will tell you that can’t last. A lot of folks had to come back down to earth real fast.”