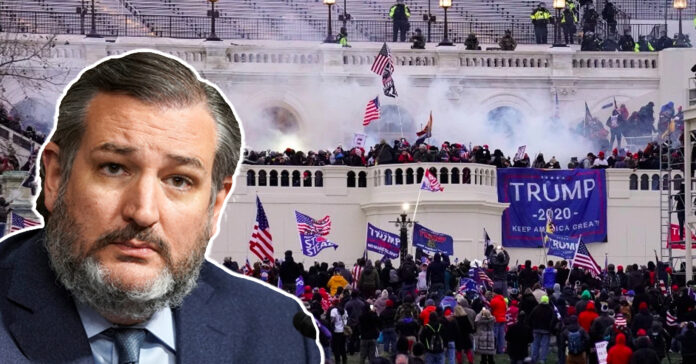 On Tuesday, during the House hearing on the Jan. 6 riot, Sen. Ted Cruz revived a disconcerting and unfounded conspiracy theory that suggests the FBI incited the attack aimed at keeping former President Donald Trump in power.

“Is the kangaroo court in the House willing to press hard and get REAL answers as to what happened with the FBI on January 6? Or is this circus simply a failed Democrat campaign commercial?” Cruz tweeted, alongside a video of his exchange with a senior FBI official.

The exchange was during a February Senate hearing, where he speculated that a former FBI informant acted as an agent provocateur, as reported by The Dallas Morning News.

So far, Cruz’s office has provided no evidence to back up his claims, yet seems to be convinced of his theory, thanks to his “heated” conversation with Jill Sanborn, head of the FBI’s national security branch.

“How many FBI agents or confidential informants participated in the events of Jan. 6?” asked Cruz.

“I’m sure that you can appreciate that I can’t go into the specifics of sources or methods,” she responded.

“Did any FBI agents or informants take part? Did any encourage or incite violence?”

“I can’t answer that,” she said, again deflecting.

Ted Crus’s so-called “feds-urrection” theory revolves around the former president of the Arizona Oath Keepers, the largest chapter of a militia group whose members took part in the Capitol attack, Ray Epps.  And how he allegedly incited the violence at the Jan. 6 riot on orders from unnamed federal officials, as reported by The Dallas Morning News.

“I grilled a senior FBI official- and she REFUSED to answer key questions,” Cruz wrote after his conversation with Sanborn. “Was Ray Epps a federal agent or informant? Did ANY FBI agents or confidential informants actively participate in the events that day? What are they trying to hide now about the events of January 6, 2021?”

However, this theory goes against all the allegations and evidence offered by the House select committee, which accuses Trump of inflaming the mob. All the evidence points to a conspiracy by pro-Trump forces that led to the attack on the Capitol.

The hearing has also focused on emphasizing that Trump knew all along that his claims about widespread election fraud were lies.

According to The Dallas Morning News, his campaign manager and other top aides testified that they’d tried to persuade him to accept the reality of his defeat. The attorney general at the time, Bill Barr, even told Trump his claims were “bull—.”

Could it be that Cruz is going down the same rabbit hole as Trump?