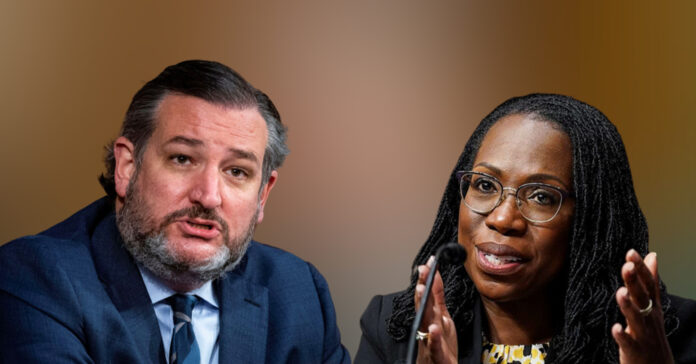 Republican U.S. Sen. Ted Cruz made his questioning of Supreme Court nominee Judge Ketanji Brown Jackson quite a spectacle. Bombarding her on “critical race theory” – attempting to frame Jackson, the first Black woman nominated to high court, as a villain for sending her girls to a school that includes the theory in their curriculum.

In the last couple of months, conservatives have turned Critical Race Theory into a polarizing issue locally and nationally, using it to describe a variety of classroom discussions about race, and alleging the conversations are discriminatory against white children, as reported by The Texas Tribune.

In one-on-one questioning, Cruz turned the hearing into a book club, where only his opinion was valid.

He first noted Jackson’s position as a board member at the private Georgetown Day School, and began to question – or attack – her. Criticizing Jackson for being the school board of a school that preaches Critical Race Theory, and worst of all, for daring to have her daughters enrolled there.

“If you look at the Georgetown Day School’s curriculum, it is filled and overflowing with critical race theory,” Cruz alleged, holding up books he said the school has on reading lists, including “Stamped (for Kids): Racism, Antiracism and You,” by Ibram X. Kendi and Jason Reynolds, as reported by The Washington Post.

“It is an astonishing book,” charged Cruz, “On Page 33, it asks the question, ‘Can we send White people back to Europe?’ … Are you comfortable with these ideas being taught to children as young as 4?”

Jackson made it clear that as a member of the Georgetown school board, she has no control over its curriculum and teachings.

“I have not reviewed any of those books, any of those ideas — they don’t come up in my work as a judge, which I am, respectfully, here to address,” Jackson responded.

However, Cruz is relentless, continuing on his take-down of Jackson, he mocks Kendi’s “Antiracist baby.”

“Do you agree with this book that is being taught with kids [at GDS] that the babies are racist?” Cruz said. Ironically, St. John’s School in Houston, where his daughters attend, has three volumes of antiracist books by Kendi.

Like Georgetown Day School, St. John’s takes a strong “anti-racism” approach. As the headmaster and chair of the board of trustees at St. Johns put it in 2020: “Black lives matter. … St. John’s, as an institution, must be anti-racist and eliminate racism of any type — including institutional racism.”

St. John’s does not limit their inclusion, apart from race they held a “Banned Books Week” that offered books on gender identity LGBTQ issues, and sex education. Fighting against a “Fahrenheit 451” dystopian reality Republican conservatives like Cruz desperately desire.

So, either Cruz is ignorant of his daughters’ lives or his hypocrisy reached new levels. Let’s not forget this is the same man who repeatedly criticized other officials for vacationing during crises — then hopped a plane to Cancún to avoid Texas’ devastating winter storm.

Now, the Senator turned Jackson’s hearing into the “Ted Cruz Show,” scolding Democrats for their “disgraceful behavior,” while constantly interrupting hectoring and sneering – searching to obtain as much airtime possible, hoping to boost his image in the process.