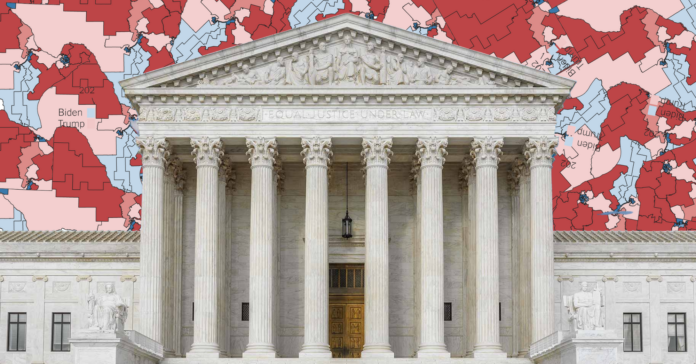 Even as the country is recovering from a slew of far-right decisions from the Supreme Court of the United States, the next major fights are already being set up. In particular, the court will hear a case that could further erode the Voting Rights Act and disenfranchise Texans of color.

The case is one of several that resulted from the 2021 redistricting following the census. Complications from the COVID pandemic delayed the results, and the process ran into the deadlines for the 2022 primaries. One case came out of Alabama. Filed by Evan Milligan, Khadidah Stone, Letitia Jackson, Shalela Dowdy, Greater Birmingham Ministries, and the Alabama State Conference of the NAACP, it claimed the state was purposefully disenfranchising Black voters.

A three-judge panel ordered new maps drawn in the January decision, but the Supreme Court reversed that call a month later, saying it was now too close to the elections to make new maps. The court voted 5-4, with conservative Chief Justice John Roberts joining the three liberal judges. The case is now scheduled for the fall term, with a decision likely next summer.

This comes nine years after the court decided that states with a history of racial disenfranchisement, such as Alabama and Texas, no longer had to have their new maps pre-approved to check for discrimination. At the heart of the latest case is whether Provision 2 of the Voting Rights Act covers discriminatory maps even if the stated purpose of the maps was not racial discrimination.

Should the court rule that racial discrimination must be overtly stated and not just apparent in the final product, Texas will almost certainly be allowed to go with maps drawn by Republicans that eliminate the power of voters of color.

When the redistricting committee, led by State Sen. Joan Huffman (R-Houston), was working on their maps, they were extremely careful to say they were not using racial data to redraw districts.

However, it is impossible to miss how the new districts empower white voters over people of color, despite whites being responsible for only 5 percent of the state’s population growth since the 2010 Census. Majority-Black and Hispanic districts in the Fort Worth area were cut up and their populations divided into districts where there is a white a majority. A similar trick was pulled around Killeen. The state’s single Black majority district was eliminated entirely.

The new maps represent a fundamental shift in power, mostly along racial lines, that cements Republicans, especially in the State Senate. Though former President Donald Trump barely carried Texas in 2022 with 52 percent of the vote, he would have won 61 percent of the new senate map under these lines.

That said, if the conservative Supreme Court decided next year that Provision 2 of the Voting Rights Act only covers acts of expressly stated racism, these maps will likely stand in Texas during the 2024 election.