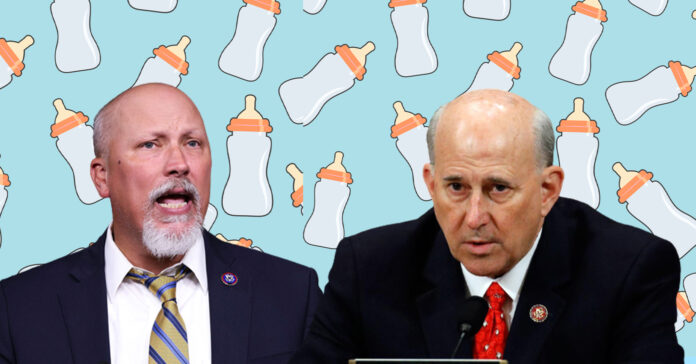 Two Texas Republicans well-known for their “pro-life” stances voted against a bill this week which would expand access to baby formula during a nationwide shortage.

The shortage in available baby formula is a result of a shutdown of a Michigan factory owned by Abbot Nutrition, the largest in the United States, in February. An outbreak of Cronobacter sakazakii was found by the Food and Drug Administration (FDA), which ultimately led to the deaths of two children. The FDA has announced that the factory could be re-opened in a couple off weeks’ time, but that it would still be months before it was producing formula.

In the meantime, President Joe Biden has invoked the Defense Production Act to speed production in other facilities as well as import formula from foreign sources. Congress also moved to act with a bipartisan bill that would expand the brands of formula approved for purchase on the Special Supplemental Nutrition Program for Women, Infants and Children program. The bill, which must still pass the Senate, would enable poor families to buy more types of formula during the shortage.

Only two Texas Republicans voted against the bill: Chip Roy (Austin) and Louis Gohmert (Tyler). Gohmert has not made a statement about his reasoning, but Roy spoke to the Texas Tribune.

“The only way to get more formula to American families is to fix the crony policies that prevent more U.S. companies from producing it, remove barriers to innovation, and allow imports from trusted nations; the legislation Democrats put forward does none of that,” he said.

It is unclear what policies Roy is referring to.

Both politicians have touted their “pro-life” stances in the past when it comes to restricting access to reproductive choice, making their votes against feeding the actual babies who result from births in the middle of a crisis odd. Gohmert has a 100 percent rating from the National Right to Life Commission thanks to his support for virtually every anti-abortion bill that has ever been put forth while he has been a member of congress.

“I am even prouder than usual to be a Texan today. Early this morning, Texas became the first state in the nation to protect unborn children from abortion after they have a detectable heartbeat. But, any woman facing an unplanned pregnancy should know that they are valued and cared for just as much. There are extensive resources available to support pregnant women who choose life for their babies.”

His assertion that young Texas mothers with children have ample resources is at odds with his vote against securing them more of what they need. The formula shortage in Texas has hit the poor the hardest. Formula can cost $500 a month per child, and some Texans are reporting that it’s made them chose between feeding themselves or feeding their child. Contrary to some popular belief, once a person has stopped breastfeeding their child, it is almost impossible for them to start up again without costly medical intervention. Formula is a necessity for these children, and making it harder to come across is not very “pro life”.