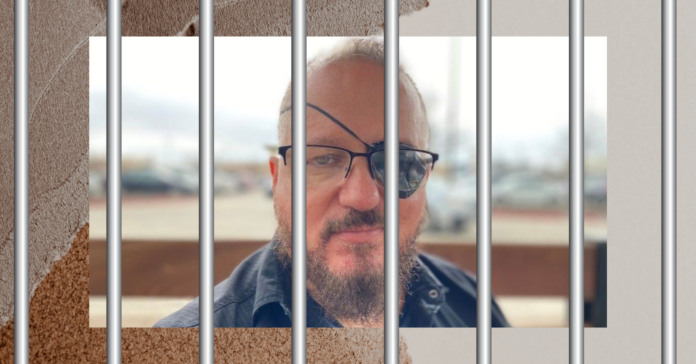 WASHINGTON, Aug 1 (Reuters) – An associate of the far-right Three Percenters militia could be sentenced to more than a decade in prison on Monday for joining the riot at the U.S. Capitol on Jan. 6, 2021, while armed and threatening to harm his own children if they ratted him out to the FBI.

Guy Reffitt, of Wylie, Texas, was convicted by a jury in March of five felony charges, including bringing a gun onto the Capitol grounds and obstructing an official proceeding.

Reffitt, who was 49 at the time of his conviction, never entered the Capitol, but video evidence showed him egging on the crowd and leading other rioters up a set of stairs outside the building.

He appeared in the U.S. District Court for the District of Columbia on Monday, clad in an orange jump suit.

His emotionally charged trial included testimony from his estranged son Jackson, who brought his father to tears as he told the jury about how his father threatened him if he dared to call the FBI.

“He said, ‘If you turn me in, you’re a traitor,'” Jackson Reffitt told jurors. “‘And traitors get shot.'”

Reffitt was the first Capitol rioter to go to trial in the U.S. District Court for the District of Columbia.

To date, federal prosecutors have prevailed and won convictions in all but one of 13 trials tied to the Capitol attack.

Federal prosecutors asked Friedrich to sentence Reffitt to 15 years, more than the U.S. sentencing guidelines recommend, including for the first time seeking a terrorism enhancement for a Jan. 6 defendant.

“The defendant was trying to overtake Congress. He wanted to sit in Congress’ chair,” federal prosecutor Jeffrey Nestler said.

She said she “watched in horror as he encouraged the angry mob to push past.”

“These are acts of domestic terrorism,” Kerkhoff said. “I recommend the defendant receive the maximum sentence.”

Friedrich said she agrees that Reffitt “should be sentenced more severely” than other similarly situated defendants, but she turned down a number of the government’s requests to enhance the sentence, including the terrorism enhancement.

Reading aloud from other Jan. 6 cases, including some involving the assault of police, she said that “in none of those cases did the government seek any of these departures” and added she does not want to create an “unwarranted sentencing disparity.”

Reffitt’s attorney has sought to portray him as man who felt marginalized and down on his luck after losing his job in 2019.

Depressed and suicidal, his attorney said he turned to political news on social media and became a fervent believer in former President Donald Trump.

In a letter to the court, Jackson Reffitt said he believed his father had “lost himself.”

He said, “I hope to see my father use all the safety nets” available at prison, including mental health care.

His daughter Peyton told the court in a letter that she could see how her father’s ego and personality “fell to his knees when President Trump spoke.”

“You could tell he listened to Trump’s words as if he was really truly speaking to him … Constantly feeding polarizing racial thought,” Peyton wrote.

His attorney F. Clinton Broden said that while his client broke the law, his actions were not as egregious as those of others who entered the Capitol and assaulted police.

He noted that Reffitt will get credit for the 19 months he has already spent behind bars since his arrest, and has asked the judge to impose a sentence of no more than two years.