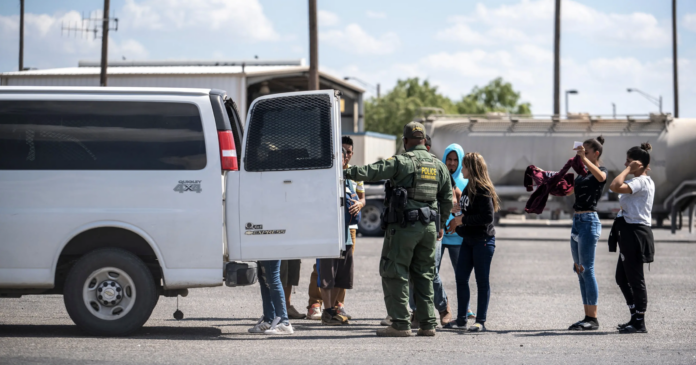 EAGLE PASS — On a cloudy recent Friday morning, the Moncada Baseball Park near the U.S.-Mexico border was empty, save for one young man practicing dribbling drills in the park’s soccer fields.

Across the street, at a busy commercial vehicle inspection site with 18-wheelers rolling through after crossing the border from Mexico, the Texas Department of Public Safety — under questionable legal authority — dropped off a group of migrants whom officers identified as having illegally crossed into the country.

The migrants, about a dozen men and women, stepped out of a white Texas Department of Criminal Justice bus and were directed toward a truck port where they sat and waited under shade near an outdoor fan for nearly three hours. Then, a federal agent in a white Border Patrol van picked them up and drove them away. A few hours later, the process was repeated with a new group of migrants.

The procedure was part of a new step in Operation Lone Star, Gov. Greg Abbott’s push to slow the number of migrants crossing the Texas border, testing the limits of the state’s ability to enforce immigration laws that are traditionally seen as a federal responsibility.

State and local law enforcement have long transferred custody of undocumented migrants to federal immigration authorities after they’ve been arrested. But previously it’s been the federal government’s job to pick them up. Abbott’s decision to arrest migrants and actively bring them back to the border, essentially forcing such a handoff, represents a broadening of the state’s role in the immigration enforcement process. But experts disagree on how significant it is or whether it’s intruding on a federal responsibility and stretching the legal limits of the state’s efforts on the border.

“There are ongoing questions about what authority they have to bus people from one location to another,” said Aaron Reichlin-Melnick, policy director at the American Immigration Council. “Legally speaking, is that immigration enforcement? I still don’t know.”

Getting answers has been difficult. Although the program has been operating since July 9, state and federal officials have ducked questions about how it works, refusing to say where the migrants are being transported to and from, what they are being arrested for and what happens to them after they are turned over to federal immigration authorities. The only way The Texas Tribune was able to confirm that federal authorities are accepting custody of the migrants was by staking out the Eagle Pass port of entry and witnessing the exchange in person.

Abbott announced his plans in early July to authorize DPS troopers and National Guard service members stationed at the border to arrest migrants caught crossing the border illegally and return them to the ports of entry. They immediately raised alarms for immigrant rights advocates who said Abbott’s plan was veering into the federal government’s purview over immigration enforcement and could lead to violations of the migrants’ civil rights because it was unclear what authority state officials were using to hold them under custody.

A spokesperson for U.S. Customs and Border Protection, which oversees Border Patrol, didn’t answer questions about how Abbott’s latest order affects agents’ work on the ground. Instead, the spokesperson referred to comments made by Chris Magnus, Customs and Border Protection commissioner, earlier this month during a news conference in Washington in which he responded to a question about Abbott’s order.

“Our goal is always to work cooperatively when we can within the law, and based on what’s appropriate under different circumstances with our state and local partners,” he said.

Texas Military Department officials provided at least one answer about how the program works at a legislative hearing earlier this month. Brig. Gen. Win Burkett of the 36th Infantry Division told lawmakers in July that National Guard service members play no role in the transportation of migrants to the border.

Victor M. Manjarrez Jr., who worked for the U.S. Border Patrol for 22 years and retired as the Tucson Sector chief in 2011, said Abbott’s latest order is nothing out of the ordinary. He said local or state officers referring migrants to Border Patrol is a common practice along the Texas-Mexico border.

First: A bus from the Texas Department of Criminal Justice leaves an area near the International Bridge in Eagle Pass. Last: Members of the Texas National guard sit in the shade with people who were apprehended by state troopers. Credit: Sergio Flores for The Texas Tribune

“Honestly, there’s nothing that special,” said Manjarrez, who is now the associate director of the Center for Law and Human Behavior at the University of Texas at El Paso.

“Instead of having troopers stuck on a highway, we’re going to take individuals to you,” Manjarrez said.

To an extent, he added, local law enforcement officers along the U.S.-Mexico border have always enforced immigration laws.

Manjarrez said that during his time in Arizona, it was common for local law enforcement officers to take migrants to Border Patrol instead of waiting for immigraiton agents to arrive at the scene.

“My argument would be, how is this different than what’s been done in the past?” he said. “The big difference with this is that there was an executive order that came out, and it was intended to make a big splash.”

But Denise Gilman, co-director of the Immigration Clinic at the University of Texas School of Law, said the transportation of the migrants to immigration authorities marks a drastic shift into a new level of immigration enforcement by the state. By taking the migrants back to the border for processing, she said, state officials are facilitating that enforcement.

“The fact that they straight up don’t take them across the border doesn’t take away the immigration enforcement nature of it,” Gilman said.

But in order to stop the practice, the federal government would likely have to sue. With Texas pressing further into immigration enforcement than any other state has done before, some immigrant rights advocates have been baffled that the Biden administration hasn’t done so.

Gilman said that may be because Abbott’s order doesn’t fully call for the state to take immigration enforcement into its own hands. State officers are still handing off the migrants to federal immigration authorities at the border.

“It’s not completely clear that it’s 100% state unilateral action, as opposed to collaborative action with the federal government,” she said.

Immigrant rights advocates also say Abbott could be inviting a lawsuit in hopes of setting up a legal battle with the Biden administration with the goal of overturning the U.S. Supreme Court’s decision in a 2012 Arizona immigration law to expand the state’s ability to participate in immigration enforcement.

Texas has successfully been able to get initial wins in lawsuits against the Biden administration that have led the White House to restart two of the most consequential Trump-era immigration policies: Title 42, the pandemic health order that essentially closes the border to most people, and Migrant Protection Protocols, or “remain in Mexico”, which forces some asylum-seekers to wait in Mexico as their cases make their way through American courts. Another Texas lawsuit also led to a federal judge ruling that Deferred Action for Childhood Arrivals — a program for younger immigrants who were undocumented to be able to get renewable work permits — is illegal. These three cases are still playing out in federal courts.

In his executive order, Abbott cited the decision in a case over Arizona’s so-called “show me your papers” law, which required police to ask people for proof of citizenship. Abbott wrote that the Supreme Court did not address “whether reasonable suspicion of illegal entry or another immigration crime would be a legitimate basis for prolonging a detention, or whether this too would be preempted by federal law.”

Reichlin-Melnick said Abbott was trying to find a loophole in the Arizona case.

“Gov. Abbott says he thinks it’s an open question about whether or not state agents can enforce unlawful entry,” Reichlin-Melnick said. “If the state can enforce federal criminal immigration laws, that would get rid of quite a lot of the restrictions put on states in Arizona v. U.S., and it’s possible Gov. Abbott is looking for a test case that can expand things in that area.”

Abbott did not answer a question about whether he wanted that case revisited and referred questions about the program to DPS.

But other Texas officials have been open about their wish to have the Supreme Court reconsider the decision.

Earlier this year, Texas Assistant Attorney General Brent Webster told a state Senate committee on border security that his office would like to see the court reconsider its decision in the Arizona case on whether local police officers could arrest migrants on immigration violations. In 2012, the Supreme Court ruled in a 5-3 decision that local police didn’t have the authority to arrest someone based solely on their immigration status.

“Our office doesn’t agree with that ruling. We abide by that ruling because that is the current state of the law out of Supreme Court,” he said. “We welcome laws that might allow us to have a new case that we could go up on to redress this issue because the makeup of the Supreme Court has changed.”

Meanwhile, Abbott has gotten around that requirement by directing state authorities to arrest migrants on state trespassing charges when they veer onto private property.

Reichlin-Melnick said it is clear that legal precedent bars local law enforcement agencies from enforcing immigration law without permission from the federal government.

“It’s pretty clear it’s not an open question. The Supreme Court has said over and over again that this is a federal responsibility,” Reichlin-Melnick said. “[Abbott’s] attempting to loophole his way out of that, but it’s not a particularly strong loophole.”