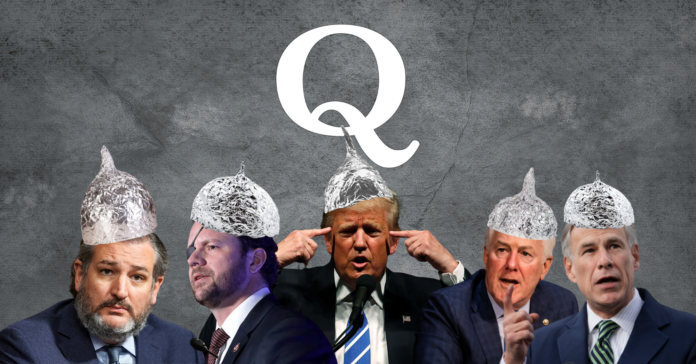 It’s fair to say that the modern Republican Party is deeply invested in conspiracy theories as an ideological basis. Policy has been largely been abandoned in favor of reactionary culture wars that run on moral panic. Here are the ones that are dominating the Texas GOP at the moment.

The Robb Elementary Massacre Was a Government Plot

With noted conspiracy guru Alex Jones getting repeatedly beaten in court after years of calling the Sandy Hook Elementary massacre a hoax, it would be logical if such conspiracy theories faded out of vogue. Unfortunately, the mass shooting in Uvalde that killed 21 people, 19 of them children, shows every sign of continuing the “false flag” tradition.

Attendees at the National Rifle Association convention in Houston three days after the shooting were happy to throw suspicion on the official story. Some merely pointed to the timing right before the event as suspicious, but others claimed it was straight out of a playbook for gun confiscation. While some do seem to think the event was staged, other like Senator Ted Cruz instead floated the idea that the shooter was a transgender leftist activist. This is likely the evolution of a long-running spin campaign that has tried without proof to paint most mass shooters as Democrats.

The Election Was Stolen

By far the biggest conspiracy theory in Republican circles right now is that the 2020 presidential election was rife with fraudulent voters. The subject is so key to conservative identity that the recent convention for the Republican Party of Texas screened the film 2,000 Mules, a documentary by a man convicted of election crimes that purports to show people casting illegal ballots but really just captures voters dropping off stacks of ballots at odd hours.

The Party passed a resolution rejecting the results of the 2020 election as part of their official platform. Multiple attendees expressed complete faith that it was impossible for President Joe Biden to have won. There has never been a shred of evidence that widespread election fraud took place or changed the winner, but Texas Republicans pushed through a massive rollback of voter access and rights in the last legislative session based on the conspiracy theory anyway.

The Texas GOP also vowed to hold a referendum on possible secession from the union. This is not technically a conspiracy theory, but it does involve a significant amount of misinformation.

First, Texas cannot legally secede from the United States. A quirk of the Texas constitution that says the state can divide into as many as five states (one of which must still be Texas) has led many people to believe that the state has some sort of legal escape clause. It does not. Secession from the union, even if the people of Texas vote overwhelming for it, would immediately draw military intervention from the far more heavily-armed federal government.

Second, a lot of propaganda around the movement comes from Russia. Russian intelligence has been a dedicated supporter of secessionist movements across the globe in an effort to destabilize various democracies. Major figures in the Texas Nationalists Movement have traveled to St. Petersburg, hobnobbing with neo-Nazis and other extremists while furthering the connection between “Texit” and anti-democracy powers.

These are just some of the many examples of nonsense that have replaced policy discussions in the Texas Republican Party. All of them have trickled up to the highest levels of state government despite having little basis in reality.