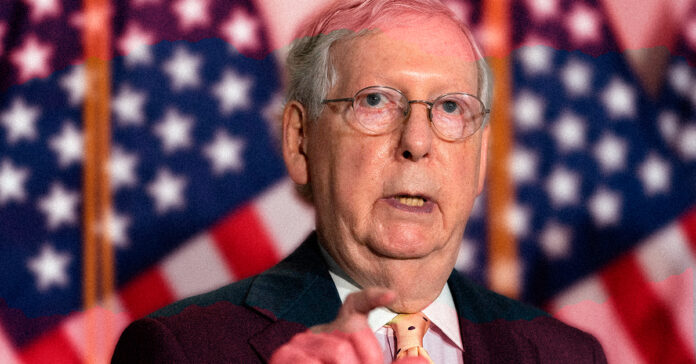 WASHINGTON, Feb 28 (Reuters) – U.S. Senate Republican leader Mitch McConnell spoke out on Monday against two Republican members of Congress who appeared at a white nationalist conference last week, making him the latest prominent Republican to rule out any role for racist politics in the party.

“There’s no place in the Republican Party for white supremacists or anti-Semitism,” McConnell said in a statement, after being asked by a reporter about appearances by Representatives Marjorie Taylor Greene and Paul Gosar at a meeting of the America First Political Action Conference.

The conference was organized by white nationalist activist Nicholas Fuentes, who has a history of making anti-Semitic statements.

The controversy underscores the political infighting between establishment Republicans and right-wing conservatives that has wracked the Republican Party, as it attempts to retake majorities in the Senate and House of Representatives in November’s midterm elections.

Fuentes, who introduced Greene at the conference, asked his audience for a round of applause for Russia as Russian forces attacked Ukraine.

Greene and Gosar have come under fire in recent days from Republican Senator Mitt Romney and Representative Liz Cheney, as well as McConnell. It was not clear how much weight their criticism carries.

Greene and Gosar, both staunch Trump allies, have already been stripped of their House committee assignments by Democrats: Greene for incendiary remarks including support for violence against Democrats, and Gosar for an anime video that depicted him killing Democratic lawmaker Alexandria Ocasio-Cortez.

Greene was characteristically defiant in the face of criticism after her appearance at the conference.

“I am not going to play the guilt by association game in which you demand every conservative should justify anything ever said by anyone they’ve ever shared a room with,” the Georgia Republican wrote on Twitter over the weekend.

“I’m also not going to turn down the opportunity to speak to 1,200 young America First patriots because of a few off-color remarks by another speaker, even if I find those remarks unsavory,” Greene said.

In June, Greene publicly apologized after being criticized for remarks comparing COVID-19 mask requirements and vaccinations to the Nazi Holocaust that killed 6 million Jews.