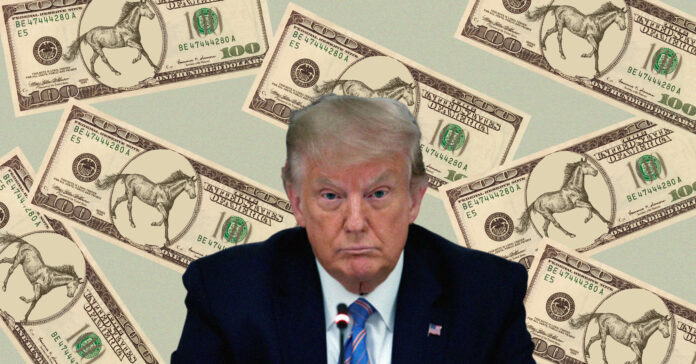 “This isn’t the 1800s,” replied a lawyer in an incredulous tone, after former President Donald Trump tried to offer him the deed to a horse to pay off his $2 million bill.

According to The Guardian, New York Times reporter David Enrich, reveals this unbelievable exchange in his new book: “Servants of the Damned: Giant Law Firms, Donald Trump and the Corruption of Justice.”

The unidentified lawyer visited the former president at Trump Tower after he refused to pay.

“Trump made some apologetic noises. Then he said: ‘I’m not going to pay your bill. I’m going to give you something more valuable,’” Enrich wrote.

Trump “rummaged around in a filing cabinet” for a while, and then pulled out a deed to a horse supposedly worth $5 million.

According to Enrich, the lawyer responded: “This isn’t the 1800s. You can’t pay me with a horse.”

In the last few years, Trump has racked up extensive legal fees in the face of personal litigation and government investigations. The Republican National Committee (RNC) has paid nearly $2 million of these and has recently threatened to stop paying Trump’s legal fees if he announces another run for president, according to ABC news.