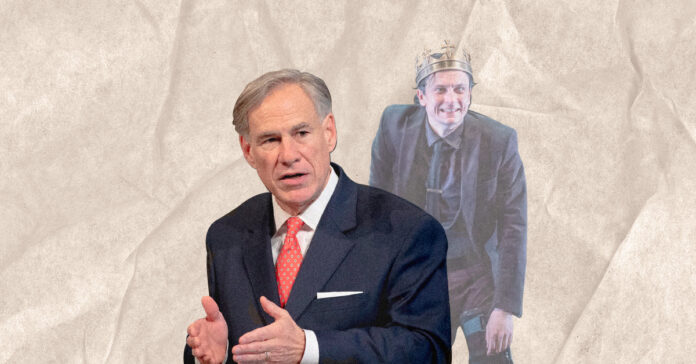 “Now is the winter of our discontent…” So spoke Richard III in William Shakespeare’s play; true in 1483 and true now.

Richard III is the precursor for most villains in both literature and history. If you study the actions of Greg Abbott since 2015 and compare them to the language, deeds, and psychopathology of Richard III, you’ll see the two men are not dissimilar.

Both are cruel autocrats and their appetite for power is insatiable. Richard III used his physical deformity as a way to define his villainous acts; Greg Abbott uses his expertise in law, because he’s not charismatic, and his biggest fear is to be seen as weak. The Kurt Vonnegut rule applies here: “We are what we pretend to be”. Or Alfred Adler’s “act as if…”

In Texas, we always go bigger in all areas, so our inability to remember the Ghost of Abbott Past is extremely selective. We choose what we want to retain and we forget the issues, people, or events that don’t fit our cognitive biases; we have selective amnesia. In the media landscape, a political bombshell has the lifespan of the average housefly. Very recently, Greg Abbott bragged that was staunchly “pro-life”, but how does he reconcile his claim with the fact that he’s responsible for the 700 deaths in Texas that were caused by his power debacle? How does he reconcile his “pro-life” label with the fact that he’s responsible for approximately 75,000 COVID deaths in Texas, one of highest death rates in the United States?

There are some things that Texans should NEVER forget about Abbott and our Republican state government and they should vote accordingly in the 2022 primaries and the midterm elections, because a few months before the elections, Texas’ GOP incumbents will attempt to rehabilitate their past history, hoping the public has forgotten some of the egregious and corrupt actions they took during the off-years.

We can’t forget that when Dan Patrick was elected, the state auditor resigned. Since that time, hiring a new auditor has been blocked, in defiance of the Texas Constitution.

We must not forget that within a month of the February blackouts, Kelcy Warren, CEO of Energy Transfer Partners, who by the way made $2.4 billion on the blackout tragedy, turned around and wrote Abbott a check for $1 million campaign contribution.

We can’t forget that Greg Abbott line-item vetoed funding for rural broadband and fiber in the last legislature and compromised funding of surcharges on VoIP/office lines in metropolitan areas. In return, he received a $100,000 contribution from AT&T the next week.

We must not forget that Abbott vetoed funding for the entire legislative branch and vowed not to restore it until the entirety of his political agenda was passed.

We must not forget that Texas Republicans passed a bill allowing gas companies to pass off $3.4 billion lost during the freeze onto the backs of consumers. Texas Republicans will raise utility bills, but they will blame the Democrats and Biden for it. Abbott takes money from regular Texans in order to help his billionaire friends in the energy field.

We can’t forget that Abbott makes a habit of shifting funds from one area to do something else and without the Legislature’s permission. Abbott takes $4 million from prisons and gives it to county election audits citing “election integrity”. Trump’s been hounding Abbott to do this. Abbott obeyed.

Abbott spent $7B of federal money to provide traveling nurses, other “temps” to prop up Texas hospitals, because he mismanaged the COVID outbreak by taking away local authority and banning mask mandates.

We cannot forget that Abbott has exploited the power of executive order and emergency powers to worsen the virus, worsen immigration, and start a war with the Federal Government; all without firing a shot.

Even now, Greg Abbott threatens a fourth special session of the Texas Legislature that’s akin to dangling the sword of Damocles over our heads.

Greg Abbott allowed many to freeze to death, with no water or electricity, while BETO went to check on people and handed out water and mobilized the Powered by People group to help.

Where was the rest of our Republican leadership? Ted Cruz was in Cancun. John Cornyn was golfing in Florida. Ken Paxton was at his out-of-state vacation home.

Beto O’Rourke has done more for Texans than the men who were elected. This is outrageous. And it will happen again and again until you make it stop.

In short, Democrats want you to have bridges, broadband, affordable prescription drugs and the unfettered right to vote.