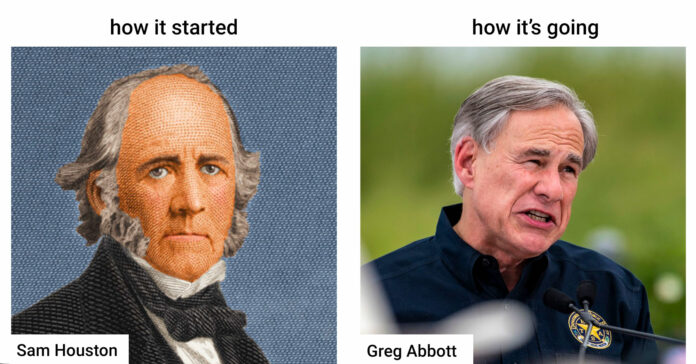 Texas wasn’t always this way; the ground zero of cruelty, disingenuous politispeak, and authoritarianism. Texas wasn’t always the butt of late-night comedians and media splashes of embarrassment and extremism. Most natives (I’m a seventh generation Texan) are honored to be Texans because we are proud individualists who respectfully speak our mind, yet we take care of those who need us with compassion and duty. No more. There are many myths, legends and rewrites about Texas history, but it’s a fact that Texas’s future is looking more and more different from its past.

If you’re a Texan born after 1999, you don’t remember much about the various Golden Ages of Texas throughout history. There were many, and in each of those eras, it was the Democratic Party that governed Texas. For about a hundred years, after Reconstruction until the 1990s, the Democratic Party dominated Texas politics. In the thirties, LBJ was the Texas doyenne of FDR.

In a reversal of fortune, the Republican Party began to grow, slowly, slowly, beginning with John Tower’s election in 1961.  Texas may have been the only state in the former Confederacy to support Hubert Humphrey in 1968, but in the eighties, prominent Conservative Democrats, Phil Gramm, Kent Hance and Rick Perry defected to the GOP. By the end of the nineties, the GOP became the state’s dominant political party after Ann Richards’ defeat to George W. Bush in 1994, ending an era where Democrats controlled the governorship for all but eight of the past 120 years.

In 2002, Texas Republicans gained control of the Texas House for the first time since Reconstruction. Fast forward twenty years and Texas remains a majority Republican state. We never appreciated those fortuitous one hundred years, and just like the lack of water from a dry well, it’s more appreciated now that it’s gone.

My Texas Golden Age existed in the seventies. There was cheap rent, outstanding live music, a reliable electric grid, and water that was clean and plentiful. At that time, we focused on keeping Austin weird. These days, I barely recognize Austin.

All things were not perfect, but we had Bill Hobby and Barbara Jordan, and Molly Ivins. Saying a bad word about the oil and gas industry was like booing Santa at the Christmas pageant. Even then, the highest peak in its history was in 1972. Oil and gas has never come that close again.

With hope on the horizon, we’re seeing a pendulum swing again. Despite Republican victories, Republican margins in Texas are in a slow decline. In 2018, Democratic Congressman Beto O’Rourke lost his Senate bid to the incumbent Ted Cruz by only 200,000 votes. O’Rourke’s success in 2018 has led political analysts to predict future gains for Democrats. Another example that foretells a future Democratic surge is the fact that Trump won Texas by 5.5 points in 2020, while Mitt Romney won the state by over 15 points in 2012.

Presently, Texas is beyond conservative. In reality, it’s politically extreme, infecting every area of Texas culture and life; from the GOP’s stubborn refusal to expand Medicare, to metaphorical book burning in Southlake to a woman’s ownership of her body. Abbott and Company are killing us—literally. Under Abbott’s reign, Texas has suffered 66,629 deaths, 59 of those were children.

The state’s organized secessionist movement is growing, threatening to rip us apart. The Texas Nationalist Movement has been working towards Texas independence for 15 years. In February, Allen West, a GOP candidate for Texas Governor, proposed that Texas’ secession be on the ballot and State Rep Kyle Biedermann granted his wish by passing HB 1359.

We MUST turn this around. Texas’ political pendulum can only swing extremely right for so long, until it breaks and swings completely out of sight.

Did you know there are 17 million MORE registered Democrats nationally than Republicans? We can register voters every day, conduct voter registration drives, stand on a street corner 24/7—but unless the new voters actually GO TO THE POLL, it’s wasted effort. If you registered someone to vote, give them a call, say hey! Remember me? And then, beg them to vote.

Texas can no longer proclaim, “Thank God for Mississippi” because we’re down there with them.