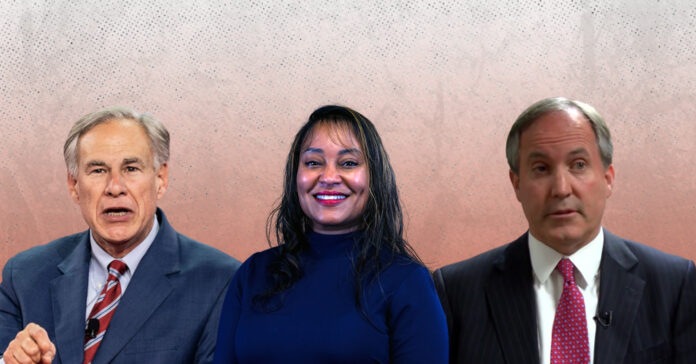 On February 18, 2022, Attorney General Ken Paxton issued opinion KP-0401 holding that Texas’ current child abuse laws prohibited the parents of minor transgender children to allow the use of certain medical and chemical procedures on their children, for it constituted child abuse. Soon thereafter, Governor Abbott sent a letter to Commissioner Jamie Masters of the Department of Family & Protective Services (DFPS) stating that he agreed with the opinion and that she “must” immediately commence investigations and if necessary, prosecutions of parents who were committing child abuse. Commissioner Masters publicly stated that she would follow the opinion and the Governor’s directive.

A lawsuit was commenced against Governor Abbott, Attorney General Paxton, Commissioner Jamie Masters and the DFPS in the 201st District Court of Travis County seeking to enjoin the parties. District Judge Amy Clark Meachum held a hearing and then issued an order enjoining all defendants from proceeding on the basis of KP-0401.

An emergency appeal was filed before the Texas Supreme Court asserting that the injunction was too broad. The Court held, among other issues, that it was illegally improper to enjoin the Governor for he had no power to act directly upon the plaintiffs. The reasoning of the Court was that Commissioner Masters was a formally-appointed, Senate-approved fixed-term Officer who could not be solely removed by the Governor, and therefore, she was not bound to follow his letter/directive/order. She maintained an “independence” to decide what the law allowed her and the DFPS to do. Thus, injunctions were only legally proper as to Masters, and the DFPS.

If the facts as set forth by the Court were true, there is no doubt the Court’s holding was valid. However, Masters’ set term had expired on September 1, 2021, five months before this controversy commenced. She was not reappointed by the Governor, nor did he appoint anyone else. He “allowed” her to remain in office as what he calls a “holdover” officer. The constitutionality of the Governor’s interpretation is debatable, but that is not the issue.

What is undisputed is that a Holdover officer does not have a set term and she may be removed by the Governor at any time, for any or no reason.

What did Masters clearly understand? When Abbott said “must,” that was an order and not a suggestion. She had no discretion if she chose to maintain her position as the Commissioner. Thus, the Court’s holding was legally incorrect, not because they got the law wrong, but because they assumed facts that did not exist; that Masters was appointed, Senate-approved, and a set term Officer of the State of Texas.

Did Governor Abbott, General Paxton, and Solicitor Stone, comply with their ethical duties to inform the Court they had it wrong? No!

An amicus brief was filed the day after issuance of the opinion that did inform the Court they had it wrong and requested to withdraw the opinion and issue a new one holding that Governor Abbott was subject to the injunction, for he was in control of Masters/DFPS. The Court did absolutely nothing, even though they had the power to do so.

The Court quickly closed the case file. However, two subsequent amicus briefs were filed citing the Court’s inherent power to act to protect the dignity and integrity of the Court. The Court Clerk rejected both filings and stated on the rejection, clearly a quote from some unidentifiable Chief Justice (?), that “the Supreme Court’s opinion is final!”

What is so important that the Governor, Attorney General and Solicitor General would not tell the truth to the Supreme Court, and subsequently the Court would intentionally and knowingly allow a legally incorrect order to stand?

Whatever the reason(s), what happened to our constitutionally-mandated independent judiciary?

What happened to justice for the parents and transgender children?