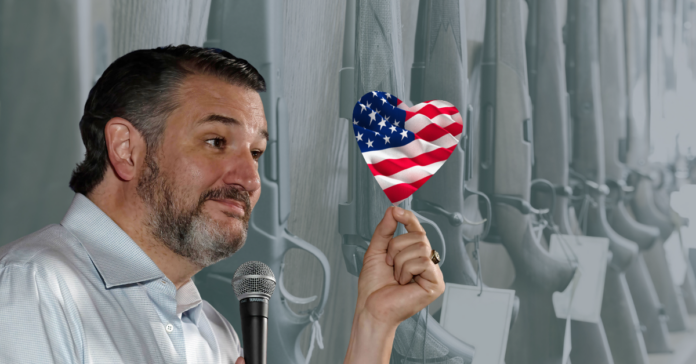 On Wednesday, Sen. Ted Cruz got into a heated argument with a British journalist on why mass shootings happen “only in America.”

Cruz joined Texas Gov. Greg Abbott and other local and state leaders at a vigil for the 19 children and 2 adults killed in Tuesday’s mass shooting at Robb Elementary School.

The Republican Senator is the lawmaker whose campaigns or political action committees have accepted most money from the gun rights lobby, yet, ironically he has been condemning “political posturing” in the aftermath of the attack.

A British Sky news reporter, Mark Stone, approached Cruz after the vigil and asked him if this was the moment to reform gun laws, to which the senator accused Stone of having a political agenda.

“But it’s important, it’s at the heart of the issue,” Stone replied.

Cruz immediately jumped into his own political agenda and stated that the Democrat’s proposals for gun reform wouldn’t have stopped a “violent psychopath” from murdering people. However, how an 18-year-old could easily get access to two AR-15s was baffling to Stone.

“Why does this only happen in your country? …. Why only in America? Why is this American exceptionalism so awful?” Stone asked.

That’s when Cruz fired back: “You know, I’m sorry you think American exceptionalism is awful. You’ve got your political agenda. God love you.”

The journalist followed Cruz as he tried to storm away and continued to insist it was just “an American problem.”

Cruz, who according to Stone does “not think that guns are the problem,” is scheduled to speak at the National Rifle Association’s annual meeting in Houston.  The event is the largest gun-lobby gathering this year and will also feature talks from a group that includes Abbott and former President Donald Trump.

According to The Washington Post, during his career, Cruz has accepted more than $442,000 from gun-rights groups, the most of any lawmaker between  1989 and 2020.

He might keep funding his campaign with their money and is vehemently opposed to proposals from Democrats on expanding background checks on gun sales, but at least he sent out his thoughts and prayers for the children and families of Uvalde.