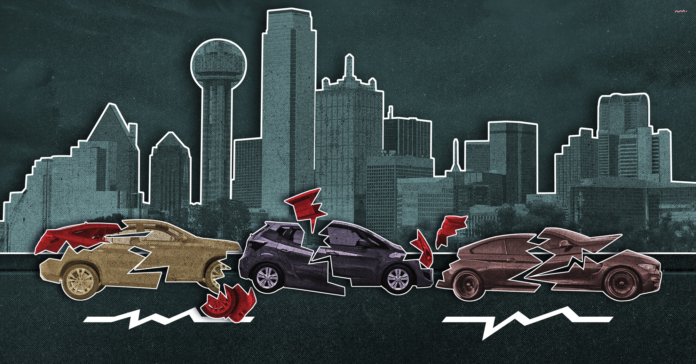 The Flatlanders song asks, “Did you ever see Dallas from a DC-9 at night?” And perhaps that’s a safe way to view Dallas these days.

Dallas has the fifth-highest rate of traffic accidents among the 25 largest U.S. cities, according to recent data presented to the Dallas City Council.

Dallas was the most dangerous city for drivers in Texas in the 2020 State of Driving Safety in Texas analysis by Aceable, a mobile-first education platform for certification and training courses.

The city tallied 14.42 fatal car accidents per 100,000 residents and ranked fifth in the category for dangerous cities for drunk driving.

Dallas isn’t sitting too pretty in the driver’s seat.

In Dallas County, rates dramatically decreased between 1997 and 2013 from nearly 200 in 1997 to 140 in 2013, according to data in the Injury Prevention Center of Greater Dallas. But the Texas Department of Transportation (TxDOT) reported in 2018 (the latest year for data), that Dallas County experienced 285 urban crashes resulting in 294 fatalities. Of those 294 deaths, 104 occurred on city streets. Ninety-three were  on interstates and 89 on highways.

Conversely, in that same year, the more densely populated Harris County totaled 218 fatal urban crashes with 228 deaths. The difference in population between these two counties is more than 2 million.

Bexar County, which includes San Antonio, had 140 fatal urban crashes with 144 fatalities. The population there is nearly 2 million.

There are a variety of reasons for high rates of fatal accidents, not one primary cause.

“Generally speaking, not just for the Dallas County area, the leading causes of crashes are motorcycles, speeding, and drunk driving,” Danielle Boyd, a TxDOT public information officer, wrote in an email to Reform Austin.

“Texas roads are some of the most dangerous in the nation, leading the nation with over 3,600 deaths in 2018,” he wrote in an email to Reform Austin. “As Texas grows and booms with development, our cities become congested, and our outlying areas are subject to risks posed by large trucks carrying heavy loads.”

Texas Monthly reported last year that data from a ZenDrive study involving 19 U.S. metropolitan regions revealed Houston and Dallas-Fort Worth drivers spent the most time on their phones, 9.44 percent, and 9.23 percent, respectively.

In Texas, drivers are not permitted to send or receive electronic messages, according to TxDOT, and drivers under 18 are prohibited from operating wireless communication devices.

But is that enough?

“Texas bans handheld use during school crossing zones and outlaws all cellphone use for bus drivers and drivers younger than 18. These are lenient laws when you consider that 20 states ban handheld cellphone use by all drivers at all times,” the 2020 State of Driving Safety in Texas analysis stated.

Seat belts figure into the fatality equation as well. Deaths attributed to individuals not wearing a seat belt increased by 6 percent from 2017 to 2018, TxDOT said, and by fastening your seat belt, the chances of survival improve by 45 percent in a passenger vehicle and 60 percent in a pickup truck.

“Texas drivers who are ticketed for not wearing their seat belt could face fines and court costs up to $200. Texas is one of the stricter states when it comes to seat belt laws,” the 2020 State of Driving Safety in Texas analysis reported.

Drunk driving is obviously another primary cause of death on Texas roads. Aceable’s analysis said that overall, Texas is only average on the strict vs. leniency scale when it comes to penalties and DUI laws.

What TxDOT Is Doing

TxDOT adopted a goal of reducing fatalities on Texas roadways by half by 2035 and ending them by 2050. The agency acknowledged it can take steps to prevent traffic deaths in a KUT article in January.

“Every day for nearly 19 years, at least one person has died on Texas roadways,” wrote Boyd, the TxDOT spokesperson. “On average, 10 people are killed on the roadways every day.”

TxDOT will allocate an additional $600 million for safety improvements on state roadways during the next two years, Boyd said. This will consist of widening certain roads, adding rumble strips on center lines and shoulders and installing new technology designed to enhance safety.

“We need to make sure that our transit is multimodal, and drivers must maintain their focus and respect the rules of the road,” Wendell said. “Law enforcement plays an important front-line role here, as do our courts in ensuring safe and responsible conduct.”