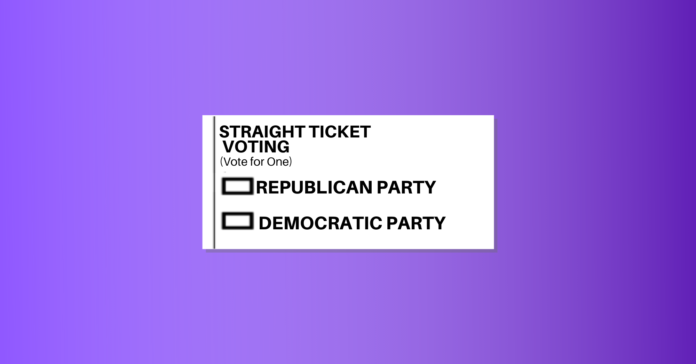 Overwhelming Democratic turnout during an adrenaline-fueled midterm election greatly aided Democratic candidates down the ballot. However, due to a Republican championed change in law during the 2017 legislative session, this November will be the first election in which Texas voters will not be able to vote a straight-party ticket.
﻿

That is, unless, the Texas Democrats get their way on the issue.
﻿

In a federal lawsuit filed on March 5 in Laredo, the Texas Democratic Party, in collaboration with national Democratic groups, is suing to preserve straight ticket voting in the state of Texas under claims that its elimination would “unjustifiably and discriminatorily burden Texans’ fundamental right to vote.”
﻿

Across the nation, Texas was one of eight states that still authorized one-punch voting, which allows voters to, with the click of a single button, vote all the way down a ballot for a single party.
﻿

And with each successive year, more Texans across partisan lines have been using  straight-party tickets to vote.
﻿

Its elimination in Texas has many Democratic officials fearing the change will disproportionately impact voters from minority communities in major metropolitan counties, where ballots are longer, and thus the cost to vote is greater.

“As the ‘cost’ of voting increases, especially the time and effort it takes to vote (even while in the voting booth), the likelihood of turnout may decrease,” Brandon Rottinghaus, professor of Texas politics and political communications at the University of Houston, wrote in a working paper. “Straight ticket voting reduces the number of unrecorded votes for offices, so eliminating the STV [Straight Ticket Voting] option should increase down ballot roll off.”
﻿

This legislation comes into effect at the end of Texas’ primaries, in which long lines have proliferated across Texas’ major urban counties. In the 2020 presidential primaries, just over 4 million Texas cast their ballots, and lines at some metropolitan locations lasted several hours.
﻿

The Texas Democratic Party has made public its desire to flip the Texas House blue. And with this new ballot stipulation, Democrats fear the end of straight-ticket voting will halt a building momentum within the party and impact the races further down the ballot.
﻿

Longer voting lines in conjunction with the elimination of one-punch voting has many fearing voters will begin to taper off the further they get from the top of the ticket. As voters move down the ballot, general voter interest and knowledge dwindles, increasing the likelihood of leaving races unfilled.
﻿

Republicans have argued that eliminating straight-ticket voting will lead to more knowledgeable ballot submissions, with voters voting in races that they are familiar with.
﻿

Historically, primary elections see significantly lower voter turnout than in the general election, meaning that Texas can only expect greater numbers in the November election.
﻿

If unchanged, Texas’ new legislation will no doubt exacerbate the issue and has the potential to encourage down-ballot dropoff.
﻿

“In ending a century-old voting practice that Texans have relied on to exercise their most fundamental and sacred rights — the rights to political participation and association — Texas has recklessly created a recipe for disaster at the polls in 2020,” read the lawsuit, insinuating problems to come.