Home Elections Why Some Texans Had to Wait Hours to Vote and What We...
Facebook
Twitter
Email 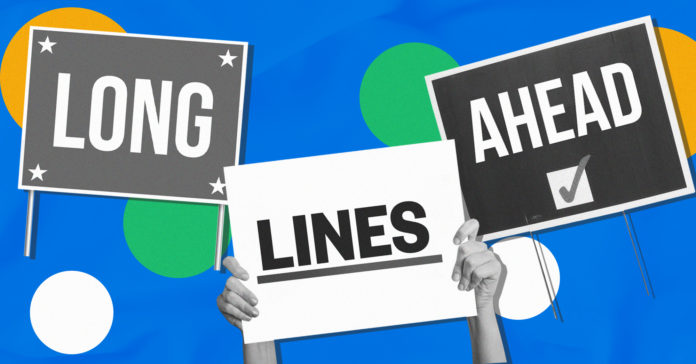 By noon on election day, voters at Texas Southern University’s polling location were already seeing wait times over an hour long, thanks to a number of malfunctioning voting machines. By evening, the wait time had more than doubled, and according to one individual, he waited in line for six hours.

It was not only college campuses that were seeing unprecedented lines at their polling locations. Lengthy voting lines broke out across Houston’s Harris County and Dallas’ Tarrant County on Tuesday, causing hundreds of voters to wait several hours in line or risk forfeiting their vote.

In Texas, most of the state’s 254 counties hold joint primaries. However, two of Texas’ largest counties, Harris and Tarrant, do not.

Due to the fluctuating composition of the Democratic presidential candidate list, many Democrats waited until election day to decide who they would vote for instead of voting during Texas’ 11-day early voting period.

In contrast to the Democratic ticket, voting among Texas Republicans was significantly lower on election day in Texas’ three largest counties — Harris, Tarrant and Travis — which  contribute about 25 percent of the total voter turnout. Texas Republican ballots saw a lack of major political opposition.

In Harris County, early reports show that 321,903 Democrats voted during in the presidential primary, and 192,985 Republicans voted. Similarly, in Tarrant County, unofficial results show 152,676 Democratic ballots were cast, while 122,802 GOP ballots were cast in the election.

Despite the imbalance in partisan turnouts, in certain large counties such as Harris and Tarrant County, voting machines were divided equally between Democratic and Republican voters.

“My office proposed a joint primary election, which would have allowed voters to vote on any available machines. This was rejected by the parties, which means both parties have an equal allocation of machines for each polling location.”

At Texas Southern University’s polling location, where long lines were reported hours after polls had closed across the state, only 10 voting machines were allocated to each party’s primary. By 8:50pm it was reported that an additional 14 voting machines were delivered to the Democratic polling location. But at that point, voters had already waited for hours to cast their ballots.

A total of 1,200 people voted at TSU’s polling center on Super Tuesday. Of those, 1,132 voted in the Democratic primary, and only 68 voted in the Republican primary.

In Texas, over one-quarter of all registered voters turned out to vote in the primary elections. While not unprecedented, it is a major achievement in Texas’ voter turnout.

Historically, primary elections see significantly lower voter turnout than in the general election, meaning that Texas can only expect greater numbers in the November election.

If Texas wants to see change in the next presidential election, it will take dedication and commitment to seeing our democratic right upheld and respected. Beyond the need for better voting technology and more polling locations, Texas needs to implement systems that make participating in our democratic process as easy as possible for voters.