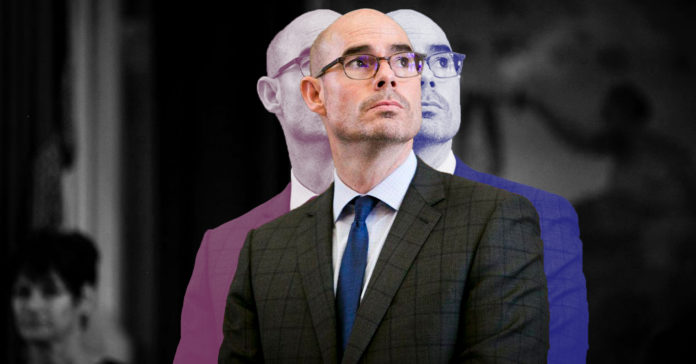 Today, Speaker Dennis Bonnen, who prior to his scandal had been one of the most influential persons in the Texas House, has broken his silence on the events that led to his precipitous fall.

“I did a poor job,” he said about the conversation that cost him the speakership.

The Scandal (What Happened)

The political entanglement that surrounded Bonnen began when Michael Quinn Sullivan, a conservative activist, accused the Republican House speaker from Brazoria County of offering his organization, Empower Texans, media credentials on the condition that it would help defeat 10 incumbent representatives from within Bonnen’s own party.

For a while, it seemed that all there was to the story was a one-sided accusation by an individual who had long been considered a fire-starter and who was described by Texas Monthly as “one of the biggest snakes in Texas politics.” The accusations were quickly addressed by Bonnen in both a letter to his fellow representatives as well as a statement to the public, denying Sullivan’s accusations, and for a period that seemed like all there would be on the matter.

That is until Sullivan came forward with a secret tape recording of the meeting. That same day, Bonnen immediately called for a public release of the recording in its entirety. In the evening, Sullivan played the tape for two lawmakers on the initial list, Rep. Travis Clardy and Rep. Steve Toth, who confirmed Sullivan’s claims.

After additional lawmakers listened to the tape and confirmed Bonnen did target a list of Republicans and did say vulgar things about his colleagues, Bonnen apologized for saying “terrible things.” Many Representatives took to Twitter, accepting and applauding Bonnen’s apology.

On Oct. 22, Bonnen announced he would not seek re-election to the Texas House. See the complete list of targets and timeline here.

Decision to Step Down and His Commentary

Prior to his fall, Bonnen had been well-regarded by Republicans as well as many Democrats. First elected in 1996, Bonnen had established relationships with many of his fellow representatives as one of the longest-serving members in the state house.

Since the initial allegations and his announcement to not seek re-election, Bonnen has remained silent apart from candidate endorsements and donations — until now.

On Sunday, Bonnen broke his silence on the Sullivan scandal, writing in a guest column The Facts, a local publication that covers Brazoria County.

Today, Bonnen spoke to Chad Hasty, host of the KFYO NewsTalk radio show about his side of the story.

In the interview, Bonnen spoke about his intentions behind the meeting as a way to get Sullivan to stop “his continual attacks on conservaitve Republicans in the Texas House.”

“I did a poor job in that meeting,” Bonnen confessed. Saying that his initial intent was muddied and poorly communicated, causing him to say things he regrets in an attempt to “appease” Sullivan.

In his interview, Bonnen denied the media narrative that his goal behind the meeting was to target seated Republicans and instead told KFYO that his intention had been to stop Sullivan from attacking incumbent Republicans in primary races.

However, Bonnen made sure to point out the fallacy in Sullivan’s most serious accusations, telling Hasty that there was no list, only a record vote on representatives who voted in favor and opposition of ending taxpayer-funded lobbying, and that the allegations of bribery were untrue. Bonnen pointed to the investigation conducted by the Texas Rangers as well as the Brazoria County District Attorney Jeri Yenne’s statements that there was nothing to charge and that he had been “cleared of any legal improprieties.”

Throughout the interview, Bonnen was quick to point out the reputation and poor behavior of Sullivan, saying that the real intent behind his meeting was to “tone down his attacks on good conservatives and slow down his rhetoric.”

Bonnen said he “apologized repeatedly” to the members he targeted and said that he spoke to those who were willing to listen to him.

Bonnen gave his greatest on-air apology to Rep. Dustin Burrows (R-Lubbock), who was at the meeting.

“[Burrows has] done absolutely nothing wrong, and he and his family had been attacked,” Bonnen said.

Listen to the complete interview here.

Lack of Speakership in the House

Bonnen’s resurgence in the media brings fresh attention to the position of speaker of the House.

As the presiding officer of the Texas House of Representatives, the speaker has the power to assign members to all House committees (and additionally assign the role of committee chair), selects the bills that will go to specific committees, and selects the group of individuals in charge of determining which bills make it to the floor and, ultimately, the governor’s desk.

With Texas Democrats attempting to flip the house, and with Democratic Representative Rafael Anchia of Dallas expressing his interest in the position, Bonnen’s step down has the potential to have great implications for Texas’ future and the redrawing of congressional districts.