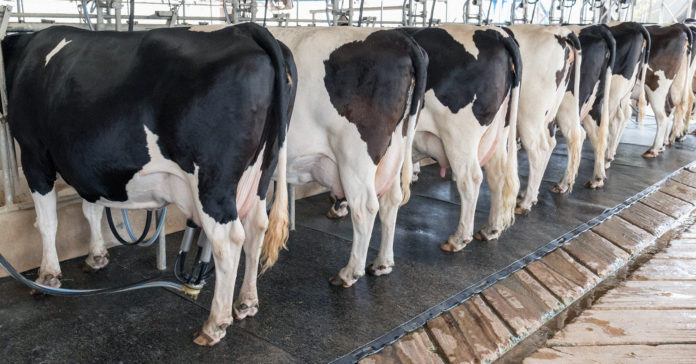 The dairy industry in Texas is seeing a technology boom.

Use of Automatic Milking Systems will only increase, experts at TAMU Agrilife wrote.

To explain the cow-meets-tech advancements, think of the robotic milking system as a sensor that detects an ear tag that indicates when a dairy cow is ready to be milked or if she is a “frequent flyer” only trying to get more treats (i.e., pellets fed at the milking robot unit), states the Texas A&M AgriLife Extension publication on Robotic Dairies.

The technology data goes deeper, and “milking robots can record milk yield, components, conductivity, at a mammary quarter level and flag cows that might have mastitis, according to TAMU AgriLife experts.

Even though the year started with Dean Foods and Borden Dairy Co. — both Dallas-based and two of the nation’s largest dairy producers — filing for bankruptcy, Texas has seen growth and innovation in the dairy industry.

Texas has seen a few farmers retire, but new, larger and more modern facilities are being built. The state’s first robotic dairy, with 1,100 cows, opened in 2019, and more are slated to go online this year, according to Progressive Dairy.

While technology advancements in the dairy industry and the growth of robotic barns may sound like more milk, they don’t exactly mean that. Texas A&M AgriLife Extension experts said that an increase in milk “could vary and will depend on genetics, environment, nutrition and management in the new facility.”

“Technology is coming in quite rapidly through the dairy industry with robotic stalls and dairy barns now being built, and there’s more being looked at all the time,” said Darren Turley, Executive Director of the Texas Association of Dairymen (TAD).

The February 2020 newsletter for TAD shares that Turley and the governmental relations team met with legislators and candidates during the primary elections to educate them on the Texas dairy industry and its impact on the state economy. The TAD is already preparing for the 87th legislative session, which starts in January 2021.

There are 375 dairies in Texas according to The Texas Association of Dairymen.

Milk is ranked third in Texas agriculture commodities for its economic impact, according to the TAD website. If you are curious where your milk comes from in Texas, you may find this interactive map helpful.

The dairy industry is all over our state, but 80 percent of Texas milk is produced in the Panhandle, Turley said in an interview with Progressive Dairy.