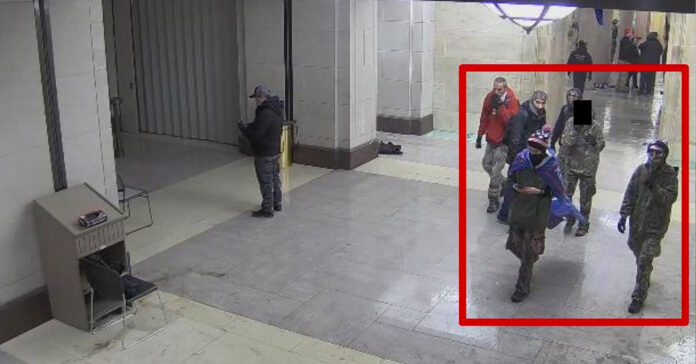 By all credible accounts, not only did former president Donald Trump know he lost the 2020 election, but he tried to steal it anyway, and led his misguided followers in an attempt to prevent the lawful transition of power on his behalf on January 6, 2021. Nearly a thousand duped supporters are facing incarceration, like the family of five from Texas who were sentenced Wednesday for their role in the chaos that day.

The Munn family from Borger, Texas, was among the first to enter the Capitol on January 6, climbing through a broken window and making their way through the crypt and visitor center before entering a Senate conference room, according to their sentencing memos.

At least 919 people have been charged in the Capitol insurrection so far, and the Justice Department has charged 72 Texans for their roles that day.

Dawn and Thomas Munn, who both received 14 days of jail time, and three adult children Kayli, Joshua, and Kristi, were given probation and home confinement.

The parents were reprimanded by DC Chief Judge Beryl Howell for bringing their children – three adults and one minor child – to Washington with the intent to interrupt the certification of  the results of the 2020 election.

Members of the Munn family were accused of bragging about their roles that day, misrepresenting the size and scope of the attack and damage. Howell also said some of the family members had made social media posts that “contributed to the misinformation about Jan. 6.”

On Thursday, the January 6 committee voted unanimously to subpoena Trump to testify under oath. They made it clear that he knew that he lost the 2020 election. Despite that, he summoned supporters like the Munns to Washington even after exhausting all legal avenues. The committee placed the blame squarely on him for the destruction, violence, and deaths that occurred that day.

In the days leading up to the Capitol attack, Thomas Munn encouraged other Trump loyalists to travel to DC to disrupt the election certification on January 6 through social media posts, and in the wake of the riot, several of the Munns posted on social media that they were at the Capitol that day.

The judge said the youngest of the family members charged, Kayli Munn, 20, invoked a “bogeyman” by claiming to have seen Antifa at the Capitol during her FBI interview. Kayli told the judge “we had an idea in our heads that we were fighting a monster.”

Dawn Munn stated that she was in Washington to confirm whether or not the 2020 election results were secure. “I was looking for somebody to show me proof that our election was going to be secure,” Dawn Munn said.

Joshua Munn, who was temporarily paralyzed for an unspecified amount of time as a child has been physically disabled since. Howell took Dawn Munn to task for “forcing” her son to march on the Capitol despite his disability.

Thomas Munn told the judge that although he had never been political before, he was in Washington because “I just kept watching what was happening on the news, and I felt we should speak out.”

Kristi Munn, the oldest of the eight Munn children, received 90 days of home detention in addition to probation. Howell said that Kristi, as a mother of three, possessed the judgment to realize that she was engaging in criminal activity, and could have made her own decision not to enter the Capitol.

In the live hearing Thursday, the committee showed never before seen videos of the violence and the chaos created by people like the Munn family, forcing congressional members to flee into hiding that day to escape the violence.

Cassidy Hutchinson, the former aide to White House chief of staff Mark Meadows, provided new testimony to the committee, relaying anecdotes of Trump acknowledging he had lost the election.

The committee also showed a yet unseen video deposition of Hutchinson where she spoke to Meadows about Trump’s January 2021 call to Georgia government officials urging them to “find” the votes he needed to win and witnessed a conversation between Meadows and Trump where he was furious that the Supreme Court had rejected his lawsuit seeking to overturn the election result.