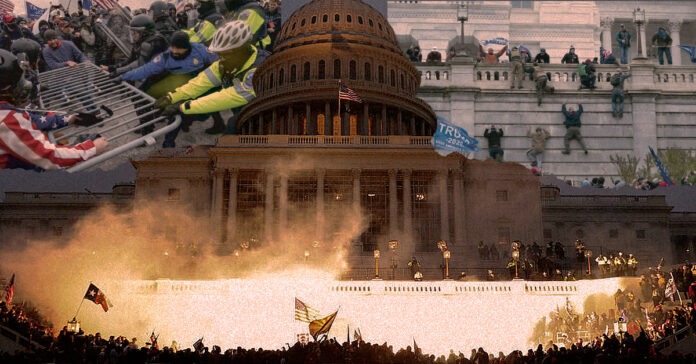 A year after the attempted insurrection at the U.S. Capitol, there are still many questions about how culpable Republican leadership who pushed the fraudulent stolen election narrative are. In some major Texas lawmakers’ cases, it could come down to a constitutional challenge.

The Fourteenth Amendment of the U.S. Constitution, Section 3, reads:

No person shall be a Senator or Representative in Congress, or elector of President and Vice-President, or hold any office, civil or military, under the United States, or under any State, who, having previously taken an oath, as a member of Congress, or as an officer of the United States, or as a member of any State legislature, or as an executive or judicial officer of any State, to support the Constitution of the United States, shall have engaged in insurrection or rebellion against the same, or given aid or comfort to the enemies thereof. But Congress may by a vote of two-thirds of each House, remove such disability.

The section has already been used to challenge North Carolina Senator Madison Cawthorn, who has been one of the largest supporters of the attacks on the 2020 Presidential Election. The question is whether a similar challenge would hold up for some Texas Republicans. Sen. Ted Cruz was literally attempting to de-certify the election when the attack started. Attorney General Ken Paxton has already been named in the January 6 investigation, with the committee asking for communications between him and former president Donald Trump. Rep. Louie Gohmert (R-Lufkin) has praised the insurrectionists and suggested that a “Second Amendment solution” is the best course of action for Republicans to regain power.

According to Drew Landry, Professor of Government at South Plains College, the legal challenges to these men continuing to hold office would likely require some sort of official declaration of treason from law enforcement. The Fourteenth Amendment was crafted after the Civil War to give former slaves rights and keep Confederates from returning to power. This doesn’t perfectly parallel with the actions of Cruz, Paxton, and Gohmert just yet.

“As much as his detractors want to pile on Sen. Cruz in this and as agitating as he may be, he is not guilty of any of those charges,” says Landry. “There is a law that lays out the counting of the electoral college votes in Congress and it stems from the Presidential Election of 1876.  His contention of the electoral vote count in Congress was legal. AG Paxton and Congressman Gohmert, on the other hand, would make an interesting case, but it would take something much more than the opinion of several people to gain traction.   From my assessment, the [Department of Justice] would have to come down on the AG and Congressman with such evidence and charge them with that crime.”

Cruz is not up for re-election until 2024, but Paxton is running for re-election this year, and Gohmert is leaving his seat to challenge Paxton for his office. The primary complaint against Paxton on the conservative side so far has been that his profound legal troubles have made him unfit for office. Gohmert may have a hard time making that argument if his actions are seen as close to treason.

The final ruling on the matter will likely have to come from the ongoing congressional investigation. The committee is only now starting to subpoena members of congress who are seen as having some ties to the insurrection as more than witnesses. Professor Charles W. “Rocky” Rhodes of the South Texas College of Law feels that there is every reason to label January 6 as an insurrection under the Insurrection Act but tying agitators to it may prove difficult. Only sporadic invocation of Section 3 has occurred since the Civil War, and none in the last century.

“Did Cruz, Paxton, and Gohmert ‘engage’ in this insurrection by their conduct and words?” asks Rhodes. “This is harder, and without more evidence, I think the answer is ‘no,’ at least for some of them. For instance, Cruz was trying to stop the election certification, but, to be objective and fair to someone who may not deserve such solicitude, I’m not aware that he had any coordination with the rioters or that he did anything to incite them or that he did anything outside of his authority as a U.S. Senator. And if any of them violated Section 3, what is the process to make that determination and how is that remedy to be carried out?”

Ultimately, it may come down to the public, not the constitution to decide the matter. With the primaries already under way, the clock is ticking on how effective a constitutional challenge would be against Paxton or Gohmert, though Cruz may yet have to face that music depending on the committee findings. Voters will have to decide if Texas Republican participation in the insurrection was a fireable offense.

“We cannot forget that AG Paxton has issues legally and politically,” says Landry. “It is not as though he has an easy primary because if he does not win outright – avoiding the runoff – there is some serious political damage for him come November.  The legislature should have investigated him while it was in session and quite frankly, still should!  I wrote about that a while ago…My analysis is public opinion will matter more than a legal one.  By that I mean, Texans may never get a legal option before the public makes it voice heard in March and later in November.”