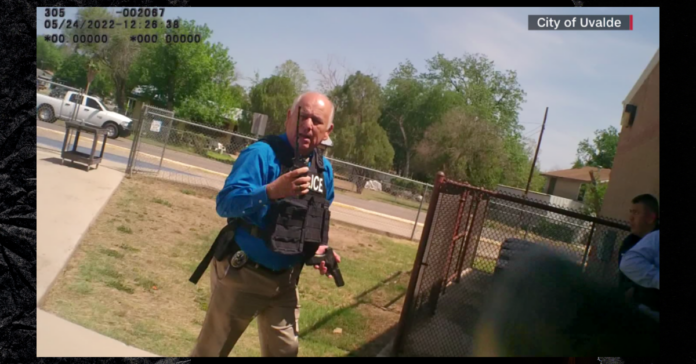 A newly released recording indicates that Uvalde Police Lt. Mariano Pargas was made aware by a police dispatcher that eight to nine students were still alive inside Robb Elementary during the early minutes of the May school massacre.

The recording of the call proves for the first time that a senior member of law enforcement was made aware of a 911 call from inside the classroom, and was given details on the exact location of the children, yet the gunman’s act of terror continued inside unabated for 77 minutes.

During that time, the gunman fatally shot 19 students and two teachers on that day.

The interim Uvalde police chief knew there was a room “full of victims” in the school, but failed to react appropriately, according to audio recordings obtained by CNN.

The conversation, which was recorded routinely as part of standard police procedures, shows Pargas calling the dispatcher at 12:16 p.m. Pargas arrived at the school that day, where his granddaughter was a student, without a radio and did not hear the transmission about a student’s 911 call, but one of his detectives made sure he was aware of what was said.

This was about six minutes after a terrified student, Khloie Torres, reached 911 — while she was still on the line with the dispatcher — and just four minutes after the call was relayed via the Uvalde police radio channel.

The audio transcript of the call makes it clear that Pargas’ stunning lack of leadership was part of the chaotic law enforcement failure that day while victims were still alive and could have been rescued.

Pargas: “The calls you got in from the … from one of the students, what did they say?” he asks.

Pargas ends the call with “OK, OK thanks” and disconnects.

He then relayed that information to a Border Patrol agent inside the hallway at 12:17 p.m. — but he didn’t mention it to a Texas Ranger just a minute later.

Surveillance footage shows Pargas leaving that hallway near Room 112 at 12:20 p.m. and he did not return, according to the CNN report.

Pargas was suspended this summer after his lack of communication, flawed decision-making, and failure to take action during critical minutes of the shooting were revealed.

Unfortunately for voters, the report came out a week after Pargas was re-elected as the Uvalde County Commissioner for Precinct 2. Pargas won the election with 45% of the vote, beating three write-in challengers — Javier J. Cazares, Diana Olvedo-Karau, and Julio Valdez.

Cazares is the father of Jackie, a student who died during the shooting.