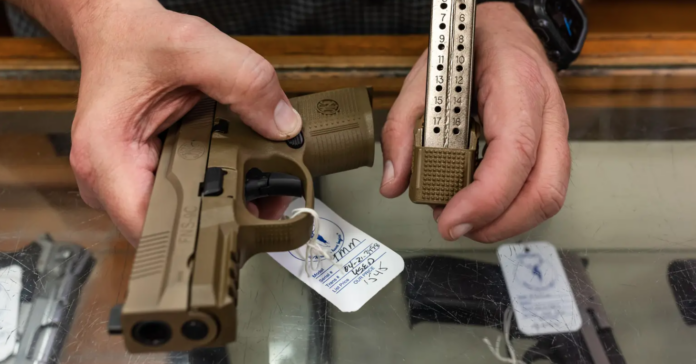 A Texas federal judge declared it was unconstitutional to disarm someone who is under a protective order, setting into motion a likely legal fight over who can possess firearms — a move that advocates say could have wide-ranging impacts on gun access across the county.

U.S. District Judge David Counts, who was appointed by former President Donald Trump, ruled last week that banning those under a protective order from possessing a gun infringes on their Second Amendment rights.

Judges who deem people a danger to family members or intimate partners can take the extra step to issue a protective order requiring people to relinquish the guns they already have. Federal law currently prohibits domestic abusers who are charged with a felony, misdemeanor or are under a protective order from possessing a gun.

The ruling comes months after a landmark U.S. Supreme Court case on the Second Amendment, the effects of which, legal experts say, are just beginning to be felt.

This June, the high court’s ruling in New York State Rifle & Pistol Association vs. Bruen, written by Justice Clarence Thomas, struck down the state’s concealed carry law and held that courts going forward should uphold gun restrictions only if there is a tradition of them in U.S. history.

The case involves Litsson Antonio Perez-Gallan, who was stopped at a border checkpoint in Presidio while carrying a firearm. Law enforcement found Perez-Gallan had a restraining order issued against him, in which case federal law prohibits the possession of a firearm.

Counts ruled that the federal government’s disarming of Perez-Gallan did not sufficiently consider the historical context of domestic abuse law when revoking his Second Amendment rights. In September, the same judge ruled that it’s unconstitutional to disarm somebody who has been indicted but hasn’t been convicted yet. He said he found no such history for limiting access to guns for those charged but not convicted of felony crimes, though he acknowledged his search was “not exhaustive.”

Counts’ most recent opinion also pointed to the lack of historical record of domestic abuse law that limits access to firearms.

Eric Ruben, an assistant professor of law at the Southern Methodist University Dedman School of Law, said the recent opinions from Counts are a direct result of the Supreme Court’s June ruling.

“The court said that the way that you’ve got to decide the constitutionality of modern-day gun laws … is not by looking at modern policy considerations, but rather looking at historical laws and trying to analogize specific legal traditions from a very different time and place,” Ruben said.

But the landscape around domestic violence and firearms has changed dramatically since the late 1700s when the Second Amendment was ratified.

Not only have firearms become much more deadly than the muzzle-loaded guns used in that era, but views about gender roles and domestic violence have developed significantly, Ruben said.

The opinion does not bar the government from continuing to prosecute cases in Texas or elsewhere, but Ruben anticipates the federal government will appeal the case. If the 5th U.S. Circuit Court of Appeals sides with Counts’ opinion, Ruben said the loosening of gun restrictions would have wide-ranging implications for gun access in the region.

The effort in Texas to expand protections for domestic abuse victims from gun violence has long faced obstacles. A small number of communities in the state have established programs to transfer firearms from people under a protective order to law enforcement, but these resource-intensive programs depend on federal and state laws that ban these individuals from possessing guns.

Nicole Golden, the executive director of Texas Gun Sense, said it’s clear why the federal government bans several groups from possessing guns, but the court’s decision goes against the crisis of gun violence and its threats to victims of domestic abuse.

A domestic violence victim’s risk of death is five times higher if their abuser has access to a firearm, according to federal data.

“It’s simply dangerous to our public safety, for our women, our families and our police officers who often are at risk when they go into a domestic violence situation,” Golden said.