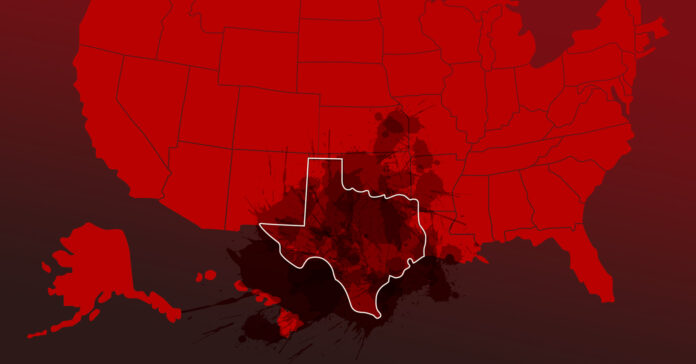 To hear any Texas Republican tell it, “blue” cities like Houston are made into lawless abattoirs by Democratic leadership. However, a deep look at the actual murder data from the last several years shows that at the state level, Republican control is typically associated with more murder.

There’s no argument that Houston does currently have a very alarming murder rate. In a recent comprehensive report by Third Way, H-Town has a whopping 17.32 murders per 100,000 residents, one of the highest in the country. Governor Greg Abbott has repeatedly used that fact to push anti-progressive agenda items such as requiring cash bail, arguing that Democrats who are coddling criminals and defunding police forces.

However, Texas itself has an out-of-control murder problem that can’t be chalked up simply to a few Democratic mayors and county judges. The state has a 6.64 murder rate per 1000,000 residents, higher than every blue state except New Mexico, Georgia, Illinois, Maryland, Delaware, Michigan, and Pennsylvania. Tellingly, four of those states only recently flipped in the 2020 election and two of them have Republican governors. On average, Third Way found that states which went for former President Donald Trump have a 40 percent higher murder rate than those who went for President Joe Biden.

It makes a lot of sense when the causes of violence are looked at more closely. Consider Chicago, which is a favorite target of Second Amendment extremists because of its higher murder rate (28.49 per 100,000) and stringent gun control. However, most guns used in crimes in Chicago aren’t purchased in Chicago or even Illinois. Sixty percent of guns recovered in crimes in Chicago come from Indiana and Mississippi, two very red states with extremely lax gun laws that are within easy driving distance of the Windy City.

Of the ten states with the most murders, eight of them are solidly Republican controlled. When it comes to recent increases in crime, red states dominated as well. Six of the ten states that saw the most dramatic increases are conservative dominated.

In shouldn’t be that much of a surprise. Two aspects of conservative ideology are reliable drivers of crime: lack of a social safety net and easy access to weaponry. For instance, Mississippi is the state with both the highest poverty rate and the highest murder rate. Of the ten red states with the highest murder rates in Third Way’s data, six are also in the top ten of the highest poverty rates. It’s long been established that there is a causal link between an inadequate social safety net and crime, something that is apparent when looking at Republican controlled state policies.

The other obvious culprit is easy access to guns. Guns and Ammo Magazine ranks states by best and worst for gun owners, with best being the fewest restrictions on ownership. Their top five states in 2020 were Arizona, Idaho, Alaska, Kansas, and Oklahoma, and three of them have higher than the national average of murder according to the Third Way data. The bottom five worst (most restrictive) gun states are all blue and all have lower murder rates than the national average.

While it may be true that an outsized amount of the crime in red states like Texas is happening in the Democratically controlled cities, the people who live in those urban centers are still affected by the policies of the state government. Any way that the data is observed, Republican control is associated with more murder at the state level. It would be ridiculous to assume that the effect simply stops at the borders of Houston, Austin, Dallas, and San Antonio.