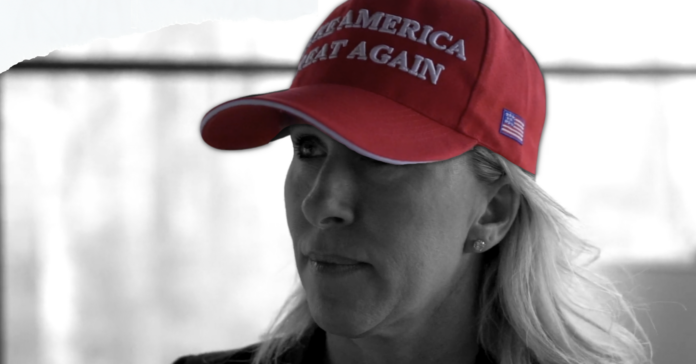 One of the oddest tableaus to play out at last weekend’s Conservative Political Action Conference (CPAC) last weekend in Dallas was the spectacle of Marjorie Taylor Greene comforting a convicted Jan. 6 insurrectionist sobbing in a cage.

The shoeless man, clad in an orange jumpsuit and a  MAGA cap, spent the weekend in a mock prison cell crying about his perceived persecution as a Jan. 6. insurrectionist. Attendees at the conference were given Bluetooth headphones and heard court testimony from Jan. 6 rioters.

Some CPAC attendees wept, some threw money into the cage, while others offered words of support. Among those in the audience, according to VICE News, was Zuny Duarte, mother of Enrique Tarrio, the ex-chairman of the Proud Boys facing seditious conspiracy charges for his role in the Jan. 6 insurrection.

While the first day of the conference featured a “crisis actor” in the cage, it was occupied on Friday by the pro-Trump #WalkAway campaign founder, Brandon Straka. A former liberal, Straka encourages other disaffected liberals to leave the Democratic party for the GOP. He was convicted earlier this year for his role in the Jan. 6 riot and

Ironically, Straka avoided any actual jail time by cooperating with the FBI and has subsequently been labeled by some as a “snitch” and a “traitor.” He pleaded guilty to a misdemeanor count of disorderly conduct, was sentenced to 90 days of home detention, a $5,000 fine and three years probation.

The ludicrous scene got even weirder when security guards parted the crowds to let Georgia Republican Rep. Marjorie Taylor Greene through. The Daily Mail reported a large cheer erupted from the crowd when the representative arrived at the mock jail. She was granted entry into the prop, embraced Straka and fell to her knees in front of him. They then joined hands and prayed together. The crowd around the cage joined in and began reciting the Lord’s Prayer and  the prayer to Saint Michael.

“She prayed with me for our nation,” Straka told the Daily Mail. “Both sides of the aisle for all people and no, I thought it was a really beautiful, special moment.”

“It’s tragic how many January 6 defendants were treated in jail,” Alex Pfeiffer, a spokesperson for CPAC, said in an emailed statement to Business Insider.

Not everyone saw the performance in a positive light.  Joe Walsh, a former Republican and Illinois representative, told Business Insider the exhibit was “crazy.” He said the performance conveyed that “everybody at CPAC, they don’t believe January 6 was a big deal or a bad thing.”