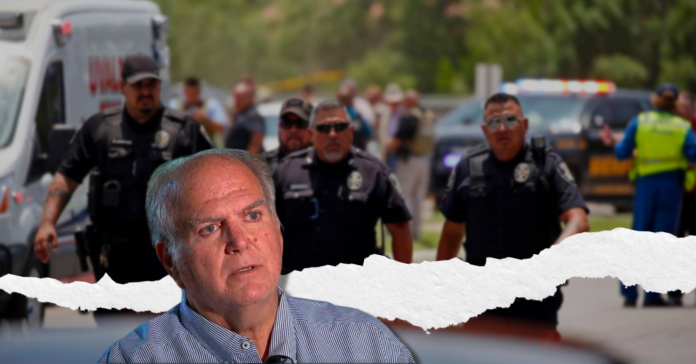 Less than a month ago, Uvalde Mayor Don McLaughlin sat with pride amongst his fellow Republicans as Gov. Greg Abbott thanked Uvalde police officers for “showing amazing courage” while trying to save lives during the worst school shooting in Texas history.

However, in the past weeks, the narrative of the shooting has shifted so much that tensions amongst leaders have risen and hypocrisy has started to break through the cracks of the GOP party.

McLaughlin went from aggressively denouncing Gubernatorial candidate Beto O’Rourke for blaming the Uvalde massacre on Abbott, to wanting to sue the Texas Department of Public Safety (DPS) for releasing contradictory information, perpetrating “false leaks” and having its own agenda in the aftermath of the shooting.

“I can’t believe that you’re a sick son of a bitch that would come to a deal like this to make a political issue,” McLaughlin said to O’Rourke after he confronted Abbott at a press conference in May.

Of all the Republicans sitting at the table that day, McLaughlin was the one who gave the most colorful response to defend his “beloved” governor, so why is it that one month later he has decided to go after the DPS? Could it be his own political stunt to try to salvage the remains of his smoldering police force?

Uvalde police officers have been under enormous scrutiny ever since the truth about their response to the school shooting surfaced  – enough officers and equipment had arrived on-site within three minutes of the gunman entering the school to neutralize him. However, police waited one hour 14 minutes, and 8 seconds to breach.

In a hearing on Tuesday, DPS Director Steven McCraw called the Uvalde police response “an abject failure.” To counter, McLaughlin claimed the information he was given in briefings by the DPS was “completely different” from the information being released to the public.

The mayor then accused McCraw of carefully selecting information to fulfill “an agenda,” which is to not present a full report of what actually happened.

“They are the Uvalde district attorney, the DPS, the FBI and the state legislature and someone has chosen to release bits and pieces of body cams, surveillance videos of their choosing … to create chaos in our community and keep the whole truth from coming out,” he claimed.

In the end, the Mayor who without a doubt defended Abbott and fellow Republicans is now questioning why it is that a department of the state government is not receiving the same level of scrutiny for its officers’ actions that day.

“Right now, I have to answer to a bunch of bureaucrats up there that haven’t been doing their damn job, but that’s why we’re calling them out today,” McLaughlin said.