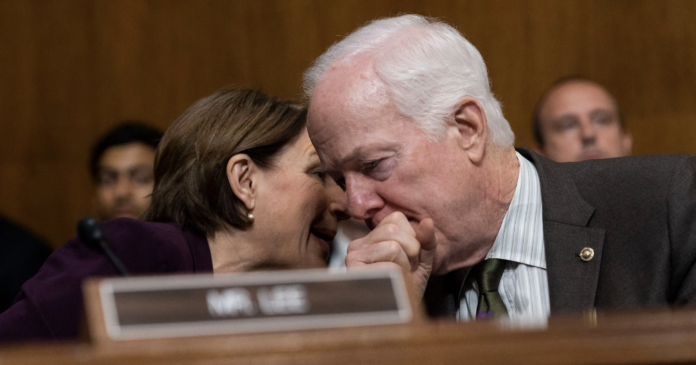 Exactly four weeks after a teenage gunman armed with a semiautomatic rifle massacred 19 elementary schoolers and two teachers in Uvalde, the U.S. Senate voted 64-34 Tuesday night to advance a bipartisan compromise that, if enacted, would become the first major legislation on gun safety since 1994.

The legislation does not restrict any rights of existing gun owners — a nonstarter for Senate Republicans. Instead, it would enhance background checks for gun purchasers younger than 21; make it easier to remove guns from people threatening to kill themselves or others, as well as people who have committed domestic violence; clarify who needs to register as a federal firearms dealer; and crack down on illegal gun trafficking, including so-called straw purchases, which occur when the actual buyer of a firearm uses another person to execute the paperwork to buy on their behalf.

Republican John Cornyn, the senior senator from Texas, who was formally rebuked by the Republican Party of Texas on Saturday evening for taking part in the bipartisan negotiations, said he felt confident that senators would see the deal as a reasonable compromise. If it holds up, that would itself be an extraordinary achievement after years in which mass shootings have devastated American communities with numbing reality.

“This is an issue that divides much of the country, depending on where you live, and maybe divides people living in the same household. But I think we have found some areas where there’s space for compromise and we’ve also found that there are some red lines and no middle ground,” Cornyn said on the floor of the Senate. “We’ve talked, we’ve debated, we’ve disagreed and finally we’ve reached an agreement among the four of us but obviously this is not something that is going to become law or fail to become law because of a small group of senators. The truth is we had a larger group of 20 senators, 10 Republicans and 10 Democrats, come together and sign on to an agreed set of principles, and I believe that as the senators see the text that supports those principles, they will see we’ve tried our best to be true to what those agreed principles should be.”

The release on Tuesday evening of the 80-page Bipartisan Safer Communities Act came after a two-step process. Twenty senators — with the Democrats led by Chris Murphy of Connecticut, and the Republicans by Cornyn — reached a bipartisan framework agreement, and then a smaller team of four senators — Murphy, Cornyn, Democrat Kyrsten Sinema of Arizona and Republican Thom Tillis of North Carolina — translated the broad principles into specific language. Less than two hours after the final text was circulated, the Senate voted 64 to 34 to put the legislation on a path to pass the Senate by the end of the week. It takes 60 votes to overcome a filibuster.

Fourteen Republicans signed on with all 50 Democrats (including two independents who vote with them) to advance the legislation. Texas’ junior senator, Ted Cruz, who has rejected gun safety reform, voted no.

The Senate Republican leader, Mitch McConnell of Kentucky, quickly endorsed the text of the legislation, while the National Rifle Association immediately opposed it. While gun rights remain a powerful element of Republican politics, the NRA itself has become a politically weaker force, partly because of financial and other scandals.

The Senate vote capped a momentous day as Texas grapples with the aftermath of the May 24 tragedy, the deadliest school shooting in its history. Earlier on Tuesday, a Texas Senate committee held a marathon hearing in which the director of the Texas Department of Public Safety squarely blamed the Uvalde schools police chief for what he called an inexcusable hour-plus delay in fatally confronting the gunman. Critics have asked whether some of the 19 students and two teachers might have survived had the delay not occurred; one teacher died on the way to the hospital.

The Uvalde schools police chief, Pete Arredondo, was elected to the Uvalde City Council before the shooting, and had asked for a leave of absence from those duties. On Tuesday, the council denied that request. (The school police report to the school board, not the City Council.)

Also on Tuesday night, the mayor of Uvalde, Don McLaughlin, accused the state Department of Public Safety of selectively leaking transcripts, video footage and other materials to the press to portray local authorities as inept.

“Someone has chosen to release bits and pieces of body cams, surveillance videos of their choosing,” the mayor said, “to create chaos in our community and keep the whole truth from coming out.”