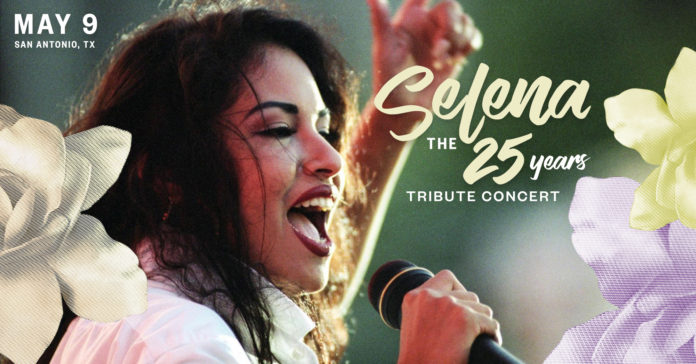 Selena’s vibrant energy and spirit will be celebrated on May 9 in San Antonio at the Alamodome, when the city will host a Selena Quintanilla-Perez tribute concert. Selena XXV-Veinticinco Años will be a day-long celebration of the Queen of Tejano, who died 25 years ago, when she was murdered at age 23 in 1995.

Selena is still known around the world as one of the first empowering Hispanic figures. The Visit San Antonio website describes her as one of the most celebrated Mexican-American entertainers of the late 20th century.

Before her death, her music resonated with fans of all ethnicities and cultures, especially Millennials, who played her CDs over and over again, learning her moves to “Bidi bidi bom bom.” The beat goes on.

Billboard wrote this month that Selena put the Latino community on the map by breaking barriers and making history. When Selena won Best Mexican/American Album at the 1994 Grammy Awards, it was the first time a female Tejano artist won the category.

The concert is bound to send fans touring and reminiscing about her life through the places in San Antonio that were seen in her music videos and the movie “Selena.”

In Selena’s music video for “No Me Queda Mas,” she sits at the River Walk enjoying the start of a meal until a note appears and her smile becomes an expression of heartache. Her fans will remember the gorgeous stairway at the historic Sunset Depot where she belted out her remorse in her beautiful voice.

There and throughout San Antonio you can also visit spots where “Selena,” the popular 1997 biographical drama starring Jennifer Lopez, was filmed and the iconic “Selena Bridge.” Fans constantly revisit spots where many key scenes were shot including the Alamodome, Poteet, Somerset Road and the library.

“The love for Selena can still be felt all over San Antonio. During any event, the moment one of her songs comes on, the crowds get up and start forming a cumbia circle on the dance floor. You can feel her positive energy in all her music,”

Loren Reyes, membership and sponsorship director at the San Antonio River Walk Association wrote in an email to Reform Austin. “Selena was relatable to the people. Selena’s legacy is strong 25 years later because she paved the way for not only female entertainers, but latino artists in the mainstream music industry. Her fashion, her voice, and her smile captured the hearts of millions.”

Selena performed her last televised concert at RodeoHouston, and a month later she was killed. The purple jumpsuit she had worn became an icon of her style and memory.

In 2019, Rep. Ana-Maria Ramos of Dallas filed House Bill 2492 in 2019 to make Selena Quintanilla Pérez Day an official state holiday on her birthday, April 16. However, the bill has a ways to go. You can follow it here through the seven steps to become a law.

Last fall in San Antonio when the Catrina Selena was unveiled on the inaugural Day of the Dead Festival, it got a large reaction. Visitors took selfies and did dance poses.

Over the past five years, Fiesta de la Flor has been held in Corpus Christi, Selena’s hometown, however when it was canceled this past fall, it led to a shift to celebrate the 25th anniversary of her death in San Antonio, another city that was dear to Selena.

Selena and her family have a lot of memories in San Antonio and chose the city for that reason.

“We are honored that this amazing tribute concert is hosted in our city. To all of Selena’s fans, on behalf of the city of San Antonio, please know that you will always have a home here,” he said.

For ticket prices and other concert information, go to the  Selena XXV-Veinticinco Años concert website.

From her first break at 15, when she won female entertainer of the year at the Tejano Music Awards to the way her music still connects with people from all walks of life 25 years after her heartbreaking death, Selena truly lives on. She is remembered for her bravery to go after what she wanted, her gentle heart, her philanthropy and her incredible talent.

Texans will never forget her saying, “If you have a dream, don’t let anybody take it away.”